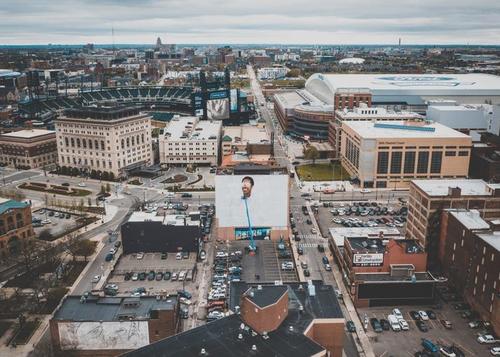 Motown legend Stevie Wonder is being honored in a bigger-than-life way this week.

A mural about 100 feet tall is being painted by London artist Richard Wilson, who was busy Monday finishing details of Wonder’s face and neck on the south wall of Music Hall Center for the Performing Arts, facing Brush Street, reports Ryan Patrick Hooper in the Detroit Free Press.

Wilson’s self-financed portrait spans roughly 8,000 square feet and is large enough to be seen from a plane overhead.

“For me, he’s the greatest living singer, songwriter and musician,” says 45-year-old Wilson. “In 300 years, I’m sure he’ll be looked [at] as a Beethoven, Mozart, Bach — that kind of epic influence on humanity.”

Here's a close-up of Wilson's progress:

Person making sure the keys on Stevie Wonder’s keyboard are parallel and equidistant-ish pic.twitter.com/drpeNFJTSG