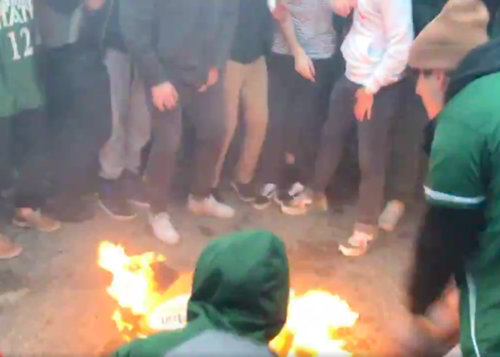 Ok, so this is an image from a March Madness "riot," but imagine the guy in the green hood is blowing on the flames, and its a symbol of the school trying to put out a fire.

Now the school wants input as it shapes its future messaging — a hallmark of sincerity.

The Free Press reports MSU has spent an unknown sum hiring a firm to circulate a survey to alumni that openly states it will help determine "future communications" by the school.

It asks how favorable people's views are toward the administration, athletic department, academics of MSU, research and leadership.

It also asks if they believe the university has done enough to make changes in the wake of the Nassar scandal.

Then it plays a video meant to be a commercial that starts with a shot of a teal ribbon. The voice-over on the video says the school didn't do enough to protect victims and took too long to respond, but has created strong policies, added staff and made a change to leadership.

That's a reference to interim President John Engler being forced out at the end of January.

The school also asks what alumni thought of the apology to Nassar survivors delivered by acting president Satish Udpa before his first Board of Trustees meeting in February. The speech struck a conciliatory tone and said the school would do better.