Patterson on cancer treatment: It'd be better with a couple of drinks

Oakland County Executive L. Brooks Patterson is shrinking before our eyes; recent photos of the man show the effects of the chemotherapy he's enduring for the stage IV pancreatic cancer he's fighting. But his sense of humor, his to-the-bone cussedness, endures, as he shows in a column for The Detroit News, detailing what we've come to call his "cancer journey." 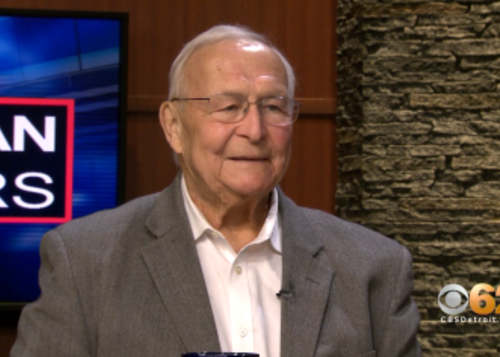 L. Brooks Patterson: "Who says cancer is not a tough disease?"

Patterson details his first symptoms (a debilitating stomach ache that kept him from attending his beloved grandson's play); his mistaken belief that, having reached 80, he was in the clear for the big scary senior exits (Alzheimer's, ALS, diabetes), and his frustration at being at least temporarily separated from his consolation of choice, which we should probably just cut and paste:

When my oncologist dropped that bomb on me on March 4, I did not scream, I did not cry, I did not stomp my feet. I needed a drink. But these modern hospitals have everything except a lounge.

In fact, chemo requires patients to abstain from drinking before, during and after the treatment, which further frustrates Patterson, who can at least regard the whole affair with his signature dry (maybe wet?) humor:

You put poison into your system, your hair falls out, you paralyze yourself for a minimum of five days, and then the “witch” doctor says you can’t have any alcohol. Who says cancer is not a tough disease?

Good to know the guy isn't collapsing in a puddle of tears. Fight on, buddy.