West Michigan's maverick Republican representative follows up on his weekend impeachment tweets to nearly a quarter-million followers. Here's what he says Monday afternoon in a 10-item thread responding to critics, presented in text form:

People who say there were no underlying crimes and therefore the president could not have intended to illegally obstruct the investigation—and therefore cannot be impeached—are resting their argument on several falsehoods:

1. They say there were no underlying crimes. 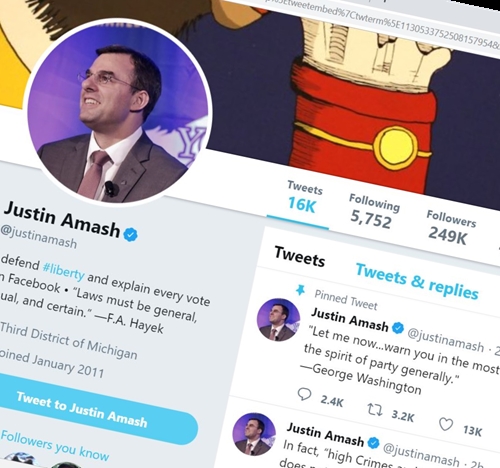 2. They say obstruction of justice requires an underlying crime.

3. They imply the president should be permitted to use any means to end what he claims to be a frivolous investigation, no matter how unreasonable his claim.

In fact, the president could not have known whether every single person Mueller investigated did or did not commit any crimes.

4. They imply 'high Crimes and Misdemeanors' requires charges of a statutory crime or misdemeanor.

In fact, "high Crimes and Misdemeanors" is not defined in the Constitution and does not require corresponding statutory charges. The context implies conduct that violates the public trust—and that view is echoed by the Framers of the Constitution and early American scholars.

A series of 13 tweets Saturday afternoon by a fifth-term congressman from Kent County are presented in text form to show what's behind the 39-year-old's out-front position among Republicans on impeachment.

Here are my principal conclusions:

I offer these conclusions only after having read Mueller’s redacted report carefully and completely, having read or watched pertinent statements and testimony, and having discussed this matter with my staff, who thoroughly reviewed materials and provided me with further analysis. 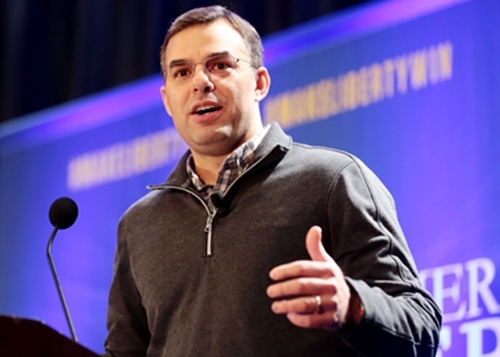 "President Trump engaged in specific actions and a pattern of behavior that meet the threshold for impeachment." (Photos: Flickr, by Gage Skidmore)

In comparing Barr’s principal conclusions, congressional testimony and other statements to Mueller’s report, it is clear that Barr intended to mislead the public about Special Counsel Robert Mueller’s analysis and findings.

Barr's misrepresentations are significant but often subtle, frequently taking the form of sleight-of-hand qualifications or logical fallacies, which he hopes people will not notice.

Contrary to Barr’s portrayal, Mueller’s report reveals that President Trump engaged in specific actions and a pattern of behavior that meet the threshold for impeachment.

In fact, Mueller’s report identifies multiple examples of conduct satisfying all the elements of obstruction of justice, and undoubtedly any person who is not the president of the United States would be indicted based on such evidence.

Impeachment, which is a special form of indictment, does not even require probable cause that a crime (e.g., obstruction of justice) has been committed; it simply requires a finding that an official has engaged in careless, abusive, corrupt, or otherwise dishonorable conduct.

"Few members of Congress even read Mueller’s report. Their minds were made up based on partisan affiliation."

Our system of checks and balances relies on each branch's jealously guarding its powers and upholding its duties under our Constitution. When loyalty to a political party or to an individual trumps loyalty to the Constitution, the Rule of Law—the foundation of liberty—crumbles.

We've witnessed members of Congress from both parties shift their views 180 degrees—on the importance of character, on the principles of obstruction of justice—depending on whether they’re discussing Bill Clinton or Donald Trump.

Few members of Congress even read Mueller’s report; their minds were made up based on partisan affiliation—and it showed, with representatives and senators from both parties issuing definitive statements on the 448-page report's conclusions within just hours of its release.

America's institutions depend on officials to uphold both the rules and spirit of our constitutional system even when to do so is personally inconvenient or yields a politically unfavorable outcome. Our Constitution is brilliant and awesome; it deserves a government to match it.

This comment is from an influential political scientist who's an author, contributing editor at The Atlantic magazine and a resident scholar at the American Enterprise Instutute  for Public Policy Research in Washington, D.C.:

Here is some thing those unfamiliar with Congress & @justinamash need to know. He is as intellectually honest as any member of Congress. His conclusions here are not partisan or ideologically driven. He has looked without bias at the evidence. Making this thread truly powerful.

And these reactions are posted Sunday:

....he would see that it was nevertheless strong on NO COLLUSION and, ultimately, NO OBSTRUCTION...Anyway, how do you Obstruct when there is no crime and, in fact, the crimes were committed by the other side? Justin is a loser who sadly plays right into our opponents hands!