Rep. Justin Amash, a fifth-term Republican from Comstock Township in Kent County, has drawn national attention since laying out a detailed case for presidential impeachment in a 13-tweet thread Saturday. He followed up Monday with a 10-tweet response to critics who "are resting their argument on several falsehoods." 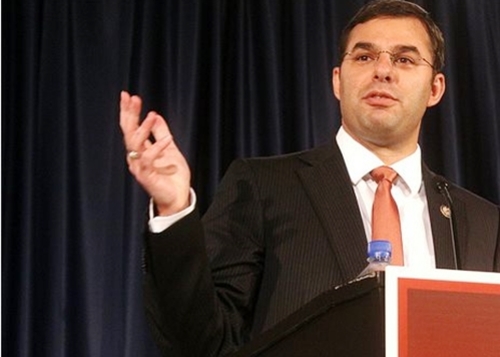 Now we learn that those who're uneasy about his bold stance include the wealthy DeVos family, as Jonathan Oosting chronicles at The Detroit News. Descendants of Amway co-founder Richard DeVos, a billionaire who died last Sept. 6, live in Amash's district and had been big campaign donors.

The family has not made any political contributions to Amash this cycle and “they have no plans to do so,” said family spokesman Nick Wasmiller. . . .

"Family members have expressed increasingly concerns about a lack of representation for their district, the third congressional, and I would say an inability to advance efforts connected to important policy matters." Recent comments by Amash "have not changed the family’s thinking regarding its intent to not provide future support," he said.

The executive director of the Michigan Campaign Finance Network adds context on Twitter:

Shortly before that setback became public, Amash got better news from The New Republic, an influential magazine.

"It was a brave thing for Amash to do," staff writer Alex Shepard says of the first Republican in Congress to suggest impeachment hearings.

Amash . . . did what Democratic leaders have declined to do for the past two years: He thoughtfully laid out the case for impeaching Donald Trump. And he did it based primarily on a close reading of the publicly available, redacted version of the Mueller report. . . .

Here was a Republican making a difficult decision based on his conscience, based on his principles, and based on the evidence."