A Taste of Israel Served at Downtown Detroit Food Court 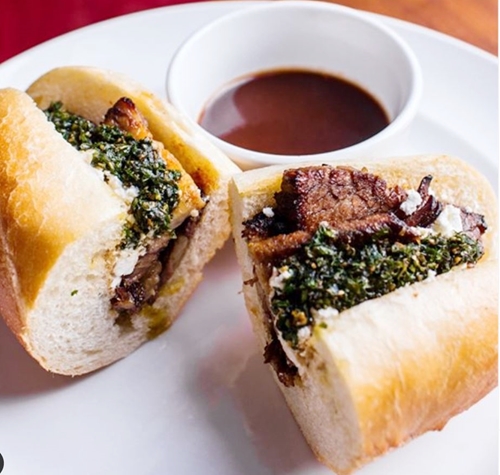 "It's safe to say that Allenby, named after a street in Tel Aviv, is the only restaurant downtown that's Israeli-inspired," writes Jane Slaughter of Metro Times.

The restaurant is located inside the Fort Street Galley food court at Fort Street and Shelby and co-owned by  chef Michael Goldberg, a native of Metro Detrot.

"Growing up, all I knew of Jewish food was you go to the deli and get a pastrami sandwich and a bowl of matzo ball soup," Goldberg tells Mero Times. "I didn't know there was a Jewish community in Iraq or one in Yemen. I learned there's a pickled mango sauce they put on falafel — it's super-common in Israel. Turns out it comes originally from India, and Iraqi Jews were traders there and brought it back, and then they brought it to Israel. So we serve that." It's called amba.

So what's on the menu?

For one, big plates of hummus, served as a main dish instead of a side.

There's also: Standard beef brisket, which is created like a "Persian dip" with a pomegranate molasses. It's served on a perfect crisp roll, and there's plenty of sweet jus for dunking, Slaughter writes. There's chicken schnitzel served in a pita. And of course, you can't have an Israeli-inspired restaurant without falafel.

On weekends, there's the popular shakshuka -- a tomato and pepper stew with eggs beaten into it and Bulgarian feta.