Want to work for Fiat Chrysler in Detroit? You’ll have to quit smoking weed 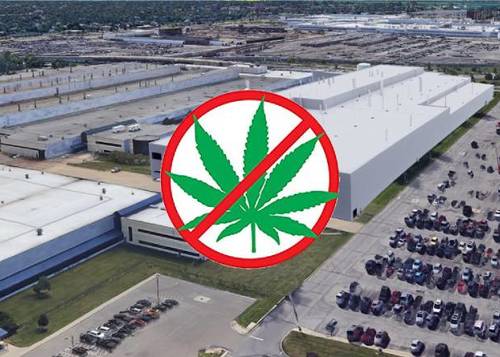 Critics argue FCA's zero-tolerance marijuana policy is behind the times.

Fiat Chrysler has the help wanted sign up for 5,000 positions in Detroit, with city residents among those to get first crack at the jobs at a new and expanded plant to be built in part with public subsidies. But applicants who smoke weed within approximately 30 days of Fiat-Chrysler’s mandatory drug screen will be turned away. And that zero-tolerance policy extends not only to recreational users of the legal substance, but also to those who take it for a certified medical condition, according to hiring criteria.

The automaker has said the advance hiring window for Detroiters is aimed “to stack the cards in their favor,” but the exclusionary drug policy concerns some who see it as a possible barrier for local hiring. Fiat-Chrysler argues the marijuana test is needed to promote “safety and productivity.”

“It’s disappointing and closed-minded,” said Cannabis Counsel attorney Matt Abel. “If they’re seriously concerned about on-the-job impairment, they really ought to be testing their employees not for the presence of THC, but for impairment.”

The recreational marijuana law passed by voters last fall contains a provision that allows companies to deny job applicants who test positive for the substance. But standard drug tests have been criticized by the pro-cannabis community for being inadequate measures of whether someone would come to work high. They also point out that no companies test applicants to see whether they’ve consumed alcohol — another legal substance — within a month.

The growing number of states that have legalized marijuana, plus a nationwide labor shortage, has prompted more and more companies to stop testing for pot or look the other way if a candidate tests positive.

But many manufacturing companies, including Fiat Chrysler and Ford, have not changed their approach. That’s even though there are now tests that can measure cognitive impairment. Druid, for example, is an app that determines a person’s baseline abilities when sober, and can be used at the start of a shift to determine whether someone is impaired.

“Companies are just afraid to go against history,” said Abel. “It’s just easier to keep doing things the same way than it is to actually deal with the issue.”

FCA’s zero-tolerance marijuana policy for its Detroit facilities appears more strict than the marijuana policy it said it employed company-wide as recently as last year. Shortly after Michigan voters last November approved a ballot measure legalizing recreational cannabis use for people 21 and up, FCA issued a statement saying that when prescribed medical marijuana users test positive, “the case will be referred to a medical officer for further consideration.”

A representative with the company declined to explain this discrepancy, and provided the following statement:

“FCA US LLC is committed to providing a safe and productive work environment and our policies in support of this commitment have not changed. All employees are therefore not permitted to possess, distribute, transfer, purchase, sell, use, or be under the influence of marijuana, (including marijuana for recreational or medical use) alcohol or an illegal substance while on the FCA US premises or while performing Company business.”

How much of an impediment marijuana use will be to Detroit hiring is unclear considering there's no data available on what percentage of city residents consume the substance.

In metro Detroit, however, the rate of marijuana use between 2005 and 2010 was 13 percent for people 12 and older — 2 points higher than the national average — according to a study by the Substance Abuse and Mental Health Services Administration. Quest Diagnostics, meanwhile, reports that southeast Michigan has among the highest rate of positive tests for marijuana use in the country, with more than 3.1 percent of all screenings conducted by the company coming back positive.

FCA would not say whether the drug testing would apply to only would-be candidates, or if testing would continue after a person is hired.