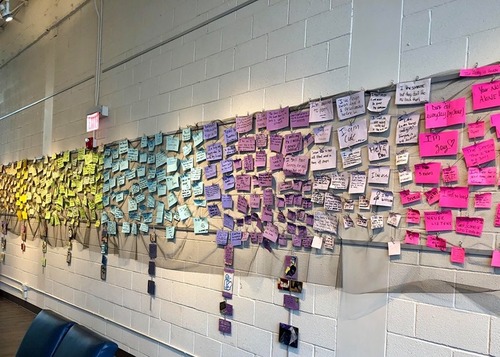 The 'Coming Out' Wall by students at Renaissance High School. (Photo: Facebook, Affirmations)

A rainbow of sticky notes at a LGBTQ+ community center in Ferndale represents an exercise in vulnerability for hundreds of Detroit High School students. The notes, all anonymous, showcase some of the students' deepest insecurities. In dozens, students come out as gay.

The notes were solicited by the LGBTQ+ Alliance at Renaissance High School, in an effort to show struggling students they're not alone. The messages were transferred from a wall at the school after administrators sought their removal, according to the community center, Affirmations.

The center writes on Facebook that 225 of the school's more than 1,200 students submitted secret notes. More than 90 students expressed distress and nearly 30 came out as LGBTQ+.

Within hours of the posts being displayed in the hallway, fifty more students had submitted anonymous secret posts, and ten more students came out as LGBTQ+.

When administration requested the wall be removed, organizations banded together to collect solidarity letters they wanted posted on the wall above anonymous posts. Anonymity faded as conversations of mental health and identity gained traction. The principal tasked two social workers to find a way to support LGBTQ+ students regularly.

RHS now has one of the state’s only in-school group therapies specifically for LGBTQ+ students.

In addition to coming out messages, the sticky notes say things like "I honestly hate school, I'm miserable here," "I want to drop out and become a stripper" and "Your not alone!"

A wall of letters in response to the notes seeks to reassure, reports Metro Times, which covered a follow-up panel discussion at Affirmations.

“Dear, I am too afraid to fail, I literally have the same fear. That’s why I try so hard at everything I do...” one anonymous student wrote.

“I feel like it gives everyone that reads it a perspective of caring for another human being and having compassion toward one another,” [said Madison Bryant-Carter, a student on hand.]