It's like a Disney cartoon come alive, or a whitetail version of "Running with the Wolves."

Software engineer Jared Wein attracted unusual company while jogging through Oak Park -- three playful deer who joined him at Shepherd Park and kept pace for roughly four blocks in the street and on sidewalks. He pulled out his phone to tape the unusual companions, which now earns media coverage, more than 18,600 viewings and a nickname: The Deer Whisperer. 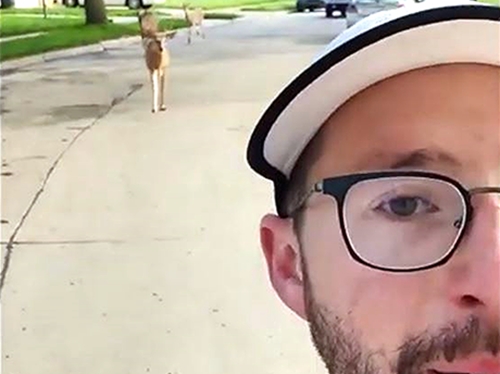 Jared Wein: "These are my pets."
(Photo: YouTube screenshot)

"This morning I ran from Royal Oak to Southfield to pick up my wife from work and brought a couple friends along for the run," posts the Michigan State graduate, who uses Jared Wein Jaws on Facebook. "These three joined me for a half mile in Oak Park and kept a good pace, somewhere around 6:11 minutes per mile."

In the two-minute YouTube video below, which he posted Monday after initially sharing three clips on Facebook, the marathoner says: "This is my parade. These are my pets. Sunday morning fun run!”

Wein, who works on Mozilla's Firefox browser engineering team, was heading to Ascension Providence Hospital on West Nine Mile Road, where his wife Samantha (aka Cherise) is a resident physician. They married locally in May 2017, four years after meeting at a MSU party.

The weekend run was a workout to join her at the end of a long shift so he could drive her back to Royal Oak. He tells WXYZ about online reactions to the odd experience:

"I had no food on me. I may have smelled like salt from sweat, but no food. . . . They seemed more curious than anything else."

He selfied the action with a OnePlus 6T phone from T-Mobile, Wein replies Tuesday to a social media inquiry.

His first three short clips from the memorable run have been seen more than 11,000 times, as of late afternoon Tuesday. This combined version exceeds 7,500 viewings.