Harris: Miguel Cabrera played with pain for years. Now the Tigers will feel some, too.

The writer is a Detroit area freelancer and former Detroit News reporter. 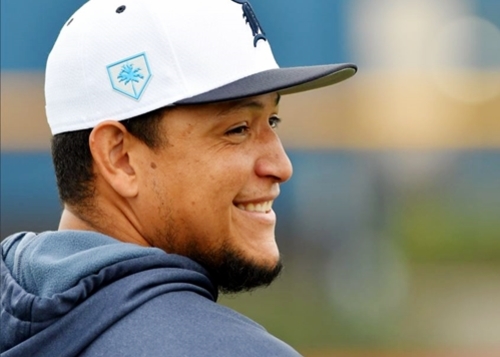 By Paul Harris
This is the cost of Miguel Cabrera playing through numerous injuries a few years ago, when the Tigers annually were contenders for the pennant and even reached the World Series.
Now 36, Cabrera has been diagnosed with “chronic changes” in his right knee.  He may be limited to designated hitter duty for the remainder of his career – for the rest of this season, anyway – and it also doesn’t bode well for the post-baseball mobility of a man who is 6-4 and has played at around 250-270 pounds and is earning a whopping $30 million a year.
According to the diagnosis, after consultation with four doctors, including the renowned orthopedic surgeon Dr. James Andrews, the knee soreness that Cabrera has experienced for much of this season is the result of his playing through groin, back, foot and various other injuries over 17 seasons.
Season-ending surgery was not recommended.
While the ultimate diagnosis of Cabrera’s knee issues was not announced until Tuesday, it has been clear for the past three seasons that his prodigious power is not what it once was. The legs are mostly responsible for generating that power and something has been amiss with Cabrera’s lower half.
Now we know the problem is his right knee, and that it will be a problem for the rest of Cabrera’s life.
In 2017, he underwent surgery on herniated discs in his back after only 16 home runs and a .249 batting average, and managed three home runs in 134 at-bats last season before season-ending biceps surgery. Cabrera’s grand slam in Tuesday night’s 9-6 win over Tampa Bay at Comerica Park was just his third home run of this season. Cabrera also has only has nine doubles in 2019, to go along with a .293 average and 27 RBI.
He returned on Tuesday after missing three games because of the soreness in his right knee.
Cabrera also must continue to give his knee extra attention on a daily basis and manage the pain.
"The only advice I can say to young kids is, take care of their body when they have to," Cabrera told reporters before Tuesday night’s game. "When they have something, stop playing for a week and come back. Don't play through pain, because you're going to pay the price later."
The Tigers organization is also suffering because Cabrera didn’t take the time to allow his body to recover over the years.
Their only marquee player during a rebuild is not even a shadow of his former self.
It was also not bad enough that they were paying a first baseman with virtually no power $30 million per season, but Detroit is now paying a designated hitter with virtually no power $30 million annually.  And will be doing so for at least the next five seasons (it goes up to $32 million in 2022), thanks to the $248 million contract extension that late owner Mike Ilitch decided to give Cabrera in 2014.
The Tigers now also lack a real major league first baseman.
Brandon Dixon played there Tuesday night. Fellow journeymen Niko Goodrum, Ronny Rodriguez and John Hicks have also played first since Cabrera’s biceps injury last season. None are natural first basemen.
So, while it is sometimes a nice, uplifting and inspirational story when an athlete plays through an injury – particularly when chasing a championship – it could ultimately be devastating for both the player and the team.
But those circumstances usually play out away from the spotlight.
Related coverage by this writer:
Paul Harris: Miguel Cabrera Has Had a Brilliant Career, And a Few Regrets Too, July 30, 2018