'The only good Muslim is a dead one:' Rep. Tlaib tears up while reading threat 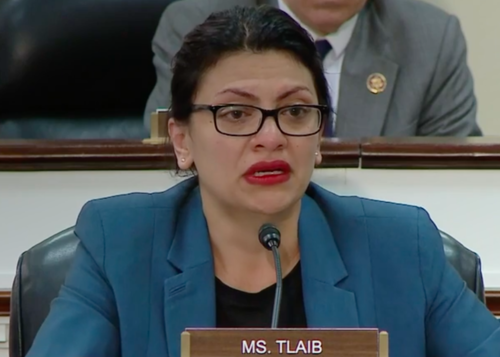 Detroit Rep. Rashida Tlaib teared up during a Congression hearing on white supremacy Tuesday as she read aloud a death threat sent to her office.

Tlaib was questioning Michael McGarrity, assistant director of the FBI's counterterrorism division, about the bureau's resources for domestic terrorism when she shared the message.

"I want to give you an example," she said. "So I've been in office for about six months. And when you get something like this, 'Attention, Congresswoman Alexandria Ocasio-Cortez and ragheads Rashida Tlaib and Ilhan Omar. I was totally excited and pleased when I heard about 49 Muslims were killed and many more were wounded in New Zealand. This is a great start. Let's hope and pray that it continues here in the good old USA. The only good Muslim is a dead one,'" she said.

The message, Tlaib said, was copied to the Department of Justice, Donald Trump and others.

"How is that not enough to fall under domestic terrorism if they're targeting solely based on my faith and others in saying that a good Muslim is a dead one? How come we don’t have enough tools right now to pull these people in?

"What happens to these individuals?"

Tlaib and Omar, both freshman Democrats, are the first Muslim women in Congress. They've both received numerous death threats since taking office.

The Hill summed up McGarrity's response:

During the hearing Tuesday, the FBI said it takes threats posed by domestic terrorism and hate crimes "very seriously" and will continue to investigate incidents, according to a copy of the testimony made available online.

Democrats have sought to put a focus on the Trump administration's handling of domestic extremist threats, as the FBI reported a 30 to 40 percent rise in such cases since October, according to ABC News.