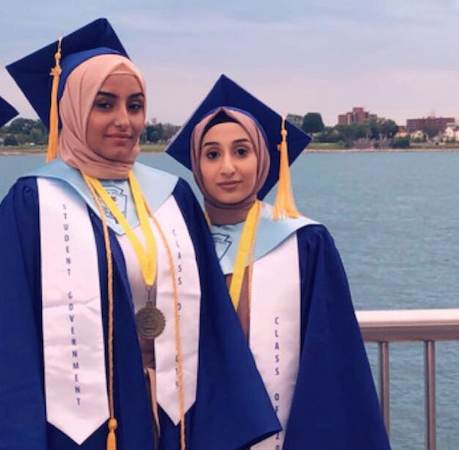 High school can be where students find their true voice.

Zainab Altalaqani, 18, left, and Tuhfa Kasem, 17, of Detroit were both named salutatorians at Universal Academy, and during their graduation ceremony speeches earlier this month at Universal Academy on Detroit's west side, they let their voices be heard, blasting the school for offering an inferior education and a culture of secrecy, John Wisely of the Detroit Free Press reports.

The pair accused the school of relying heavily on substitute teachers,  backing out of promised benefits, firing teachers who advocated for kids and silencing students and parents who speak out.

CEO Nawal Hamadeh ordered the microphone silenced during the second speech but by then, the point had been made, said Tuhfa Kasem, 17, whose speech was cut short, the Freep reports.

"She asked for me to be escorted out but the parents had my back," Kasem said. "The cops came in. The parents were like 'you're not going to touch her.' "

The school called the criticisms unfounded.

"A few disgruntled adults have attempted to sully the academy’s honorable achievements and the graduation celebration to cause controversy to serve their own agendas, which have nothing to do with the students’ best interests," the school said in a statement, according to the Freep.. "The student speech ... was merely the result of the work of those adults to accomplish their goals. We are so sad to see that some of our students were misled and used to serve agendas that have nothing to do with what really serves their interests."