Comerica Executive and Past U.S. Senate Candidate Are Among 22 Charged in Child Sex Sting

A Metro Detroit bank executive with a law degree and a 2018 fringe party U.S. Senate candidate were among 22 men recently arrested by a new Genesee County Sheriff’s Office task force on suspicion of soliciting sex with children. The charges capped a five-week sting operation. 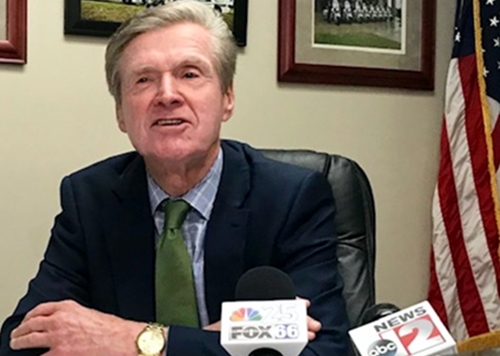 "We used to worry about children when they were outside the house," Sheriff Robert Pickell said in Flint as he announced the arrests Monday, according to Frank Witsil of the Detroit Free Press."Now we have to worry about them when they are inside the house, up in their bedroom and browsing on their computer."

Suspects are 25 to 71 years old. Task force deputies posed as 14-year-old boys and girls online and arranged to meet at hotels and motels, where the men were busted.

Two suspects sexually assaulted their own young children and took money from others having sex with them, the sheriff says,