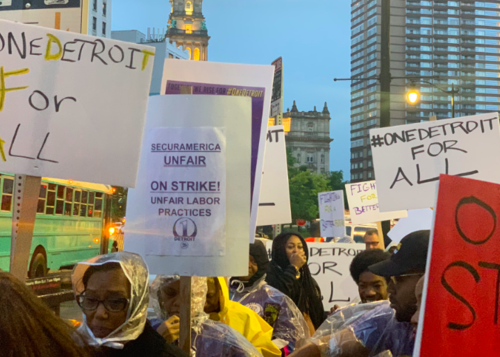 WDIV is reporting that unionized janitors at seven buildings -- including the First National Building, One Campus Martius, One Woodward, Chrysler House, Chase Tower, Ally Center and Federal Reserve -- will not cross picket lines.

The guards, who are not in a union, demonstrated earlier this week at Campus Martius. City Councilwoman Janeé Ayers wrote in support of the workers in a Free Press op-ed last week.

The guards are employed by SecurAmerica, based in Atlanta. They earn $11-$13 an hour, according to the Service Employees International Union. A statement by that union says:

"They walk off the job in response to threats of retaliation from their employer -- SecurAmerica -- when they exercised their legal right to come together in a union to fight for $15/hour and better working conditions."