A Milford lawmaker, who received $6,000 in campaign donations from the Moroun family, wants the state of Michigan to stop incurring expenses connected to construction of the new Gordie Howe International Bridge, even though those costs are being reimbursed by Canada, multiple sources are reporting. 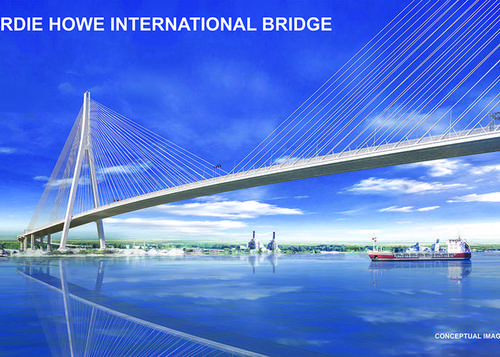 Rendering of the proposed Gordie Howe International Bridge between Detroit and Windsor.

Rep. Matt Maddock, a Milford Republican, is chair of the House Appropriations Subcommittee on Transportation, and last week told the Free Press that the GOP is considering selling the state's share of the Blue Water Bridge at Port Huron to raise money for road repair statewide.

In his capacity as committee chairman, he added language about the cost reimbursement to the state transportation budget, which moves to the full House today. The budget would have to be reconciled with the Senate version, and then could face a line-intem veto from Gov. Gretchen Whitmer, the Freep writes.

The Moroun family wholly owns the Ambassador Bridge in Detroit, and has lobbied tirelessly to preserve its monopoly on Michigan bridge crossings to Canada, donating to multiple lawmakers, mostly Republicans, for years. Former Gov. Rick Snyder faced heavy opposition from his party in negotiating the deal that set the new bridge project in motion. Canada is bearing nearly the entire cost of the $4.4 billion span.

The state has spent $230 million on purchasing land and engineering work on the Michigan side of the bridge. But every penny has been reimbursed by Canada, said Jeff Cranson, spokesman for the Michigan Department of Transportation.

... The move to cut any type of state funding of the bridge has critics worried that work on the bridge could be stalled or stopped. But that is not his intent, Maddock said.

“Are we getting reimbursed with a check, or are they issuing us toll credits that are going to take place in the future after the bridge is built?” he said. “We just want to create more transparency. … And why should Michigan be the credit card for Canada?”

Michigan Advance said Maddock told reporters that objectors were making “a mountain out of a molehill” and that he fully supports the Detroit River bridge project.