The Ulysses S. Grant House, a clapboard structure of no architectural significance and the former president's home for barely a year, is being moved, from the fomer state fairgrounds at 8 Mile and Woodward to a new site in the Eastern Market neighborhood. 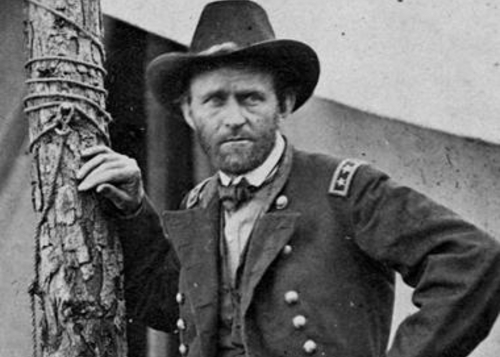 Although we love the detail in Louis Aguilar's story for The Detroit News:

The two-story white clapboard house was last used as a storage facility when the fairgrounds closed in 2008. As recently as April 2018, the windows of the home were boarded up, some walls had holes and several rooms  had piles of trash. In the second-floor bedroom, there was a dirty waterbed.

A dirty waterbed! Now that is gold, and we hope it, too, will be preserved, but fat chance:

Later this year, tentatively in August, the Julia and Ulysses S. Grant home will be moved to the corner of Orleans and Wilkins street, thanks to efforts by the State of Michigan Dept. of Natural Resources, the state of Michigan History Center and the Eastern Market Corp., which is the nonprofit that manages the historic market.

The idea is, yes, to turn it into a mini-museum. While Ohio generally gets the claim on Grant -- he was one of eight mostly mediocre U.S. presidents who hail from the Buckeye state -- Michigan had him for a while, too. And so:

“This will not be a traditional house museum,” said Sandra Clark director the Michigan History Center in Lansing. “Our hope is to make it a place to explore Grant’s life and the impact he made on Detroit while living here and in his later actions as a Civil War general and U.S. president.”

OK, then. We look forward to the opening of the Julia and Ulysses S. Grant home "sometime early next decade," the News reports.