Arguments for and against Detroit Police Department use of facial recognition software were voiced at a town hall meeting Thursday night that included a police leader.

"This technology is meant to use for perpetrators who rob, rape, [commit] criminal sexual conduct, shoot and murder," Assistant Chief James White said at St. John Lutheran Church on Oakland Boulevard in the west side's Barton-McFarland neighborhood, Fox 2 News reports. "It is to improve public safety, it is not to issue traffic tickets, it is not to garner information from the innocent, it is not to create a database." 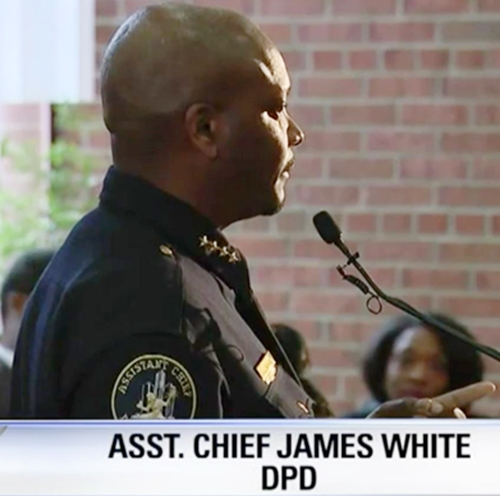 The program "is not to create a database," the assistant chief says. (Photo: Fox 2 News video)

The station's nearly five-minute report by Randy Wimbley (video below) also presents critics of the technology, used to identify potential suspects by analyzing video from more than 550 Project Green Light cameras and other public security systems. "Anyone who would sacrifice liberty for a little temporary security deserves neither," said Eric Williams, a senior attorney at the Detroit Justice Center, a nonprofit law firm.

The community meeting was held to gather public views for consideration by the Board of Police Commissioners, which will review the department's draft policy for use of its facial recognition system.

Speakers included Pastor Maurice Hardwick of the Live in Peace Movement, who endorses the approach.

"We have to drive crime down using every ability or tool we can use to make our citizens safe," he said.

Mary Sheffield, a city council member, tossed out questions that concern her:

"How is the data going to be used? Will it be shared? How long will it be kept? What areas is it going to be deployed in?