Nights are seldom quiet in Detroit. A recent one sent its police force chasing a traffic collision with a DDOT bus, an officer-involved shooting and a dog mauling. Among many others. 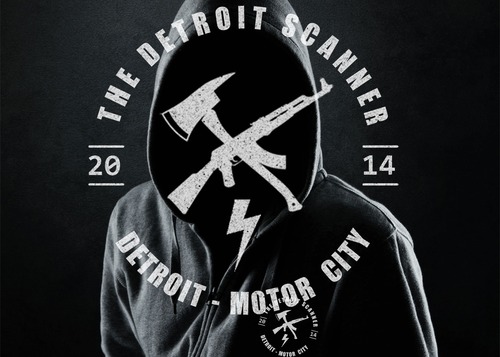 The retired cop behind the handle @detroitscanner doesn't particularly like posting crime updates, but says he does so because Detroiters depend on the information. (Photo: John Roberts)

John Roberts is the man behind the Twitter account @DetroitScanner (TheDetroitScanner on Facebook, where he has 7,800 followers). The account’s photo is a masked figure, which makes sense, given that Roberts is publicity-shy; he wouldn’t submit or sit for an unmasked photo.

He takes pride in telling residents what’s really going on in Detroit, from his home in St. Clair County. That’s where Roberts owns and operates a wildlife rehabilitation clinic, taking in injured animals, treating the ones he can, and sending them on their way.

While Roberts is doctoring raccoons and opossums in the far exurbs, people living in and around Detroit depend on his Twitter account -- with 5,300 followers -- as a type of police scanner, often answering questions posed by followers who want to know why all those lights and sirens were in the neighborhood.

“He’s a great example of a citizen journalist who is covering crimes that are being ignored by the mainstream media," says Steve Neavling, reporter for the Metro Times. "As something happens, he’s on top of it . . . I know a lot of news agencies rely on him for breaking news.”

An Air Force veteran and former cop, Roberts came by his love of and skill with police radios not only on the job, but far earlier: He, like his father, grew up with scanners as a form of household entertainment.

“When I was a child in the early ‘70’s I had family in the LAPD,” he said. “Little calls would play in the house on the old scanners.”

“When I became a police officer (in Orange County, Calif.), my father would do the same thing, listen to the scanner, to keep tabs on his son. It’s always been a family thing.”

Retirement brought a move from California to his wife’s native Midwest. Roberts decided to launch the Motor City 911 Twitter account in 2013, when he noticed the difference between what he heard on the police scanner versus what was reported on the local news.

“I realized that the news wasn’t delivering what it should...about the reality of the neighborhoods in Detroit.” He says. “People in Detroit knew there were things going on, but other than what they heard on the street, they didn’t have any idea.”

Roberts laughs when he says if the local news wanted to, they could fill an entire broadcast with incidents from the scanner.

Roberts is quick to acknowledge the heavy nature of listening to EMS and police dispatch calls night after night.

Roberts will also, on occasion, post recordings of audio traffic and brief news stories on a separate website. For something he hates, his output is only growing.

“Children shouldn’t be all over the internet,” he said. “That should be left to families and police. But it bothers me when I hear about kids walking alone at night in diapers. “

However, he said, Detroit is not an anomaly, despite its fearsome reputation.

“Detroit is just one city. The same thing is happening in other places. I get upset when people say it’s only in Detroit that this is happening. It’s happening everywhere.”

Roberts attributes much of the crime in Detroit to mental illness. He believes if more resources were put toward addressing what believes is the root cause, crime would lower.

So while the scanner isn’t all fun and games, Roberts believes value exists in the service he provides.

“To fix a problem, you have to know there’s a problem.”