The writer is a former Detroit Free Press reporter and member of the Belle Isle Concern.

A project designed to improve the habitat of Belle Isle’s ecologically sensitive east end has flooded large portions of the very places it’s designed to benefit. But the project’s director says not to worry.

“We’re glad that we’ve made the restoration,” says Sam Lovell of Friends of the Detroit River. “Nobody involved with the project anticipated this, but nobody is alarmed.”

The flooding has resulted from the first stages of a multi-year plan to cycle Detroit River water through the island’s Lake Okonoka, coming just as Great Lakes water levels have risen to near-record levels. It’s gotten progressively worse all spring, and the DNR announced Tuesday that it’s closing Central Avenue through the 200-acre flatwoods – the wooded area nearby – until further notice.

It all started when Blue Heron Lagoon was opened to the river near the Livingstone Lighthouse at the far eastern end of the park. That allowed east winds off Lake St. Clair to push water into the lagoon, now essentially an inlet of the river. The river has gotten so high this year that picnic tables along Lakeside Drive across from the Nature Center are sitting in the lagoon.

This year, project work on a new bridge on Lakeside has blocked the traffic that would normally circle Belle Isle. The bridge allows water from the lagoon to flow unimpeded under the road into Lake Okonoka.

That bridge work is almost done — and now, Lovell says, the water level on Lake Okonoka is four to six inches higher than the river itself. The water has not only seeped into a large part of the adjoining woods, it has swamped and forced the closure of Woodside Drive, which was for awhile being used as a bypass around the bridge construction on Lakeside. As the flood has continued to worsen, it’s gone over portions of The Strand near the Coast Guard station and invaded the woods so much that it’s caused asphalt on Central Ave. to break up.

Though Great Lakes water goes up and down cyclically, the big rise in water levels this year somehow caught project planners by surprise.

“This is a hundred-year flood, so the water should go back down,” says Lovell. “But for this summer, it is what it is.”

When a culvert is built by late this year to connect Lake Okonoka directly to the river on the Canadian side, it will complete the fish passageway. Lovell says the culvert should drop the water levels significantly. The final project work will include a bridge on the Strand over the culvert, between Woodside and the Coast Guard station. Until then, the flooding is expected to worsen as river levels are predicted to rise another four to six inches, according to DNR parks chief Ron Olson. But, speaking at Thursday’s meeting of the Belle Isle Park Advisory Committee, Olson said “the Lake Okonoka thing is not connected to” the island flooding -- and later added “we want the Lake Okonoka project to be done more than anyone does.”

The anticipated result, according to the FDR website: “89 acres of calm spawning and nursery habitat for Great Lakes fish protected by a narrow landmass… Lake Okonoka will likely become a high-quality haven for young fish to find shelter until they're large enough to survive in the Detroit River.”

Mid-project, much of the eastern end of Belle Isle seems more alarming than calm to the casual observer. And, though Lovell is confident the water will drop, he concedes that no one can say for sure whether global warming may be pushing the lakes to a new abnormally high end of what was once a more predictable multi-year cycle.

Lake Okonoka is one of three lakes on Belle Isle that were closed off from the river in the 1950s, “creating stagnant conditions” and contributing to “the degradation of the wet-mesic (lowland grassland) flatwoods community and Lake Okonoka,” according to the FDR website. 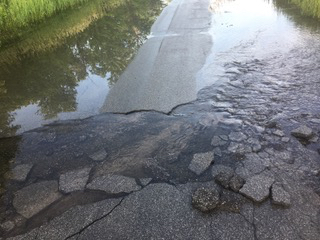 The $5-million Lake Okonoka project is administered by FDR with Great Lakes Restoration Initiative money provided by NOAA. Besides refreshing the lake habitat, the project was envisioned to help restore the vulnerable flatwoods, one of the best remaining patches of a once-common Great Lakes environment. The flatwoods suffers from poor drainage and trees dying from oak wilt.

But at this stage of the project, both dying and live trees in the woods are sitting in floodwater. And with the Strand, Woodside, and Central all now closed, the only route through the woods to the Nature Center, the golf driving range, the Detroit Yacht Club, and other areas on that end of the park is Oakway. But last year the DNR said Oakway would eventually be closed to help with drainage of the flatwoods.

Lovell says “portions of the woods have always had flooding” and adds that red maple trees there can take some months of standing in water.

Indeed, the island, like much of the riverside sections of the Detroit area, had historically been a wetlands marsh. The high water, says Lovell, is “a bit of a surprise, but this has been the way it’s been on Belle Isle for thousands of years.” From now on, as it used to be before human intervention, “whatever happens in the river will happen on Lake Okonoka” as far as high or low water. Lovell is confident the lake level will cycle back down, and the restoration project will pay dividends for the animals, plants, fish, and people on Belle Isle.

Nothing about the project has been modified because of the high water, except that bids have gone out to contractors to elevate some portions of Woodside and adjacent picnic and lawn areas and pathways. Lovell says there’s money in the budget to do “some of it” — if not all, “then we’ll prioritize what we can do.” Woodside won’t reopen as a throughway even when the project is complete. It’s supposed to become two stubs of a dead-end road off the Strand and Lakeside Drive.

The high water levels on the Detroit River are gobbling up other pieces of the park, too. The more the east wind blows this year, the more the island shrinks.

Picnic shelter #9 costs $150 a day to reserve. It’s one of the best shelters on Belle Isle, with a concrete floor right next to a short walkway along the freighter channel on the Canadian side near the Dossin Great Lakes Museum.  But if the wind is wrong, the floor of the shelter is under several inches of water.

Across the island is a kayak launch on the east end of the beach near the yacht club. The bottom of the ramp is flooded and adjoining sections of sand are washed away.

Kayakers are ankle-deep in water well before they get their craft down the ramp to the inlet and climb in.

Nearby, on the beach itself, there’s a slice maybe ten feet wide and a hundred feet long where the sand is underwater. It’s a little wading pool when the wind is low—but merges with the river itself when the water is higher.

Belle Isle, like much of the river shoreline, was once mostly a marshy wetland until it was built up with fill dirt. Today, it looks like nature wants it back.