Hail to the (almost) victors.

"One down, one to go: Michigan baseball on the brink of a national championship," says a Detroit Free Press headline after UM beat Vanderbilt 7-4 Monday night in the NCAA College World Series at Omaha, Neb. 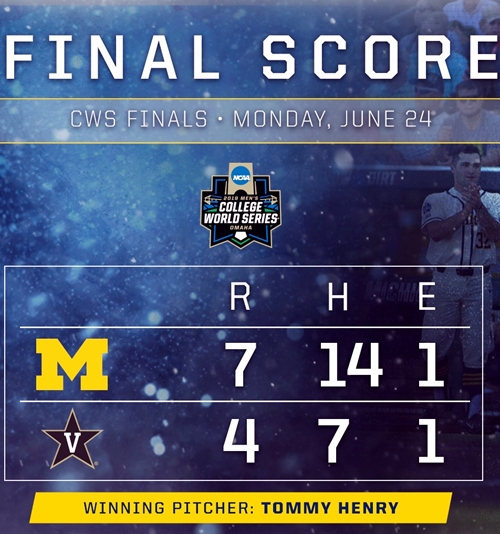 The next game in the best-of-three final series starts at 7 p.m. our time Tuesday on ESPN and streaming at espn.com.

"Vanderbilt is considered one of the best teams in college baseball, a well-oiled machine with plenty of experience on the game’s biggest stage," writes Anthony Fenech of the Freep. "And Michigan has to beat it twice."

[Jimmy] Kerr delivered the knock-out blow. . . . His no-doubt, two-run home run in the top of the seventh inning [Monday] gave left-hander Tommy Henry much more insurance than he needed for his final win as a Wolverine. . . .

The pitcher from Portage, Mich., threw eight and one-third innings with eight strikeouts to earn his 12th victory this season.

The Wolverines, who barely got into the NCAA Tournament after a shaky regular season, are seeking the university's first baseball championship since 1962. This is Michigan's first World Series appearance in 35 years.

A third game in the finals, if necessary, would be Wednesday at 7 p.m.