Detroit police on Hellcat stunt: Stay off the Lodge wit it 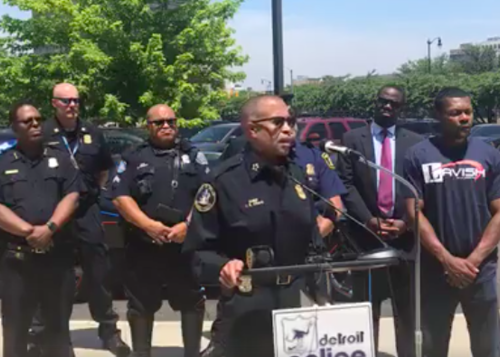 Detroit Police Chief James Craig: "I promise you that Hellcat will be ours."

Detroit police are threatening to seize the vehicles of a group of drivers who were seen blocking off the Lodge to do burnouts and other stunts in a now-viral video.

In a news conference Monday, Detroit Police chief James Craig said the department is pursuing six suspects who were involved in the Friday "reckless driving" incident. Some of them allegedly lacked licenses, insurance or proper title to the cars.

"Take the risk, your $70,000 automobile will be impounded and when we do the forensic work on that car and if we find there's any criminality, you will never see that vehicle again," said Craig, standing before a striped Dodge Charger previously seized by the department after its owner was found to be selling drugs. "I promise you, that Hellcat will be ours."

The investigation is being aided by plate numbers that appeared in the video. One alleged participant has already been arrested, according to Detroit police. He is a 25-year-old from Canton who was involved in a separate reckless driving incident in Rouge Park the following day. Police say he didn't have a license and his car was impounded.

Four of the six supects are from the suburbs, according to Craig.

Detroit is somethin else they blocked off M-10 last night doing donuts pic.twitter.com/rNRYACuJRn

The department has been cracking down on drag racing and other forms of reckless driving on public roads in recent months. DPD is not permitted to chase over traffic incidents, so it's been using a helicopter to follow the drivers and see where the vehicles land.

Friday night's incident was posted to Instagram and Twitter and first reported by Deadline Detroit. It showed the cars fishtailing under a canopy of smoke as onlookers cheered. One woman repeatedly shouted, "We on the Lodge wit it!"

Michigan State Police, responding to a 9-11 call, brought the incident to an end. The video shows the cars peeling off when the police show up, with the caption "Fuck 12," meaning the police.

"Technology is our friend... so we're asking the people that are breaking the law: Please continue to post yourselves on social media," MSP Lieutenant Michael Shaw said at the Monday newser. "That's going to help us out a great deal to find you like we're doing now,"

An arrest has been made in the Lodge Fwy takeover that was the subject of a video that went viral. @detroitpolice Chief James Craig says the driver arrested for allegedly doing donuts is a 25 year old from Canton. Listen live https://t.co/rjkMApPyfq pic.twitter.com/3glNExScEy

Craig expressed a willingness to work with the city establish a designated location where hobbyists can to race or do car tricks. He said he's supportive of car culture, but that there will be "zero tolerance" for incidents like Friday's.

"You endanger too many lives," Craig said.

"Of course it’s illegal, but it’s not as important as the rapes shootings and murders going on right now," he said. "I believe [the department] is more into solving the petty crimes."