Pour one out for Giordano's, the latest restaurant in the here yesterday-gone now category of Detroit's dining-entertainment-business district. 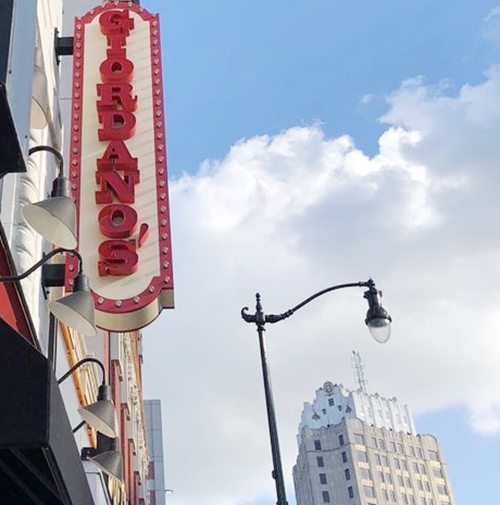 Nearly hour-long waits for stuffed deep-dish pies made this "a tough sell with the lunch crowd or those looking for a quick bite," The Detroit News says. (Photo: Yelp, Peter Y.)

In that vein, the Free Press goes with this web index headline: "Another downtown restaurant bites the dust." Mark Kurlyandchik doesn't hold back about the outsider near Greektown:

Giordano's, which set up shop downtown less than two years ago to sell its Chicago-style affront to pizzas everywhere, has closed.

The windows at its 1224 Randolph location were covered in paper and a metal security door had replaced Giordano's front entrance as of July 1, but it's unclear when the Detroit outpost of the Illinois-based national chain had officially called it quits. . . .

In addition to being on hostile territory, Giordano's was located around the corner from homegrown marinara-pie slinger Pizza Papalis, which remains a popular option for local traitors.

The business has three stars out of five on Yelp, its average rating from 258 reviews. "The deep-dish style took upward of 45 minutes to bake, making the spot a tough sell with the lunch crowd or those looking for a quick bite," writes Melody Baetens of The Detroit News.

At Eater Detroit, editor Brenna Houck notes that residents, workers and visitors have lots of pizza places to pick:

Since Giordano’s opened downtown [in September 2017], Detroit’s restaurant scene — and particularly downtown — has been increasingly flooded with pizza options, including Mootz Pizzeria and Bar and Pop + Offworld Arcade.

Just within a few blocks of the Giordano’s location, visitors to downtown eat pizza at Brass Rail or the square, Detroit-style slices at Niki’s Pizza.

The now-vacant Randolph Street site had been "briefly occupied by Bagger Dave's until 2015," Houck recalls.