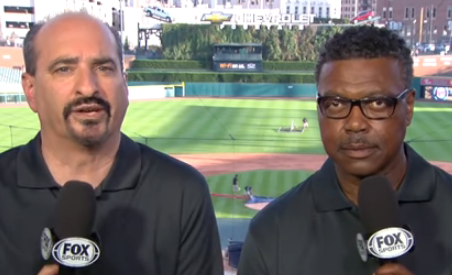 You probably recall that Tigers broadcasters Mario Impemba and Rod Allen were unceremoniously fired last September after a physical altercation in Chicago.

Impemba was back at Comerica Park Friday night -- but this time as a broadcaster for the Boston Red Sox, whose president of baseball operations, Dave Dombrowski , once ran the Tigers.

Impemba tells Tony Paul of The Detroit News:  "It was strange taking my route to the ballpark, but not parking in the same parking garage, not going in the same booth, not walking into the same door."

Impemba says he doesn't like to talk much about what happened last year. He says it does little good.

"I'm angry. I was angry," Impemba said. "You know, I spent 17 years here in my hometown, this is my hometown team, I wanted to leave on my terms when I felt I couldn't do the job anymore and say, 'It's been a great ride, thanks, I appreciate the opportunity.'

"And I was robbed of that. There's some bitterness and anger there that you've gotta flush out. I think I'm getting there.