First of two parts. An excerpt from the new book is here.

The immersion is deep and knowledgeable for Stryker, a former Free Press arts reporter and music reviewer whose first book comes out Monday. "Jazz from Detroit" explores a lifelong interest.

Stryker, who was at the Freep from 1995 until a voluntary buyout in December 2016, has played alto sax since sixth grade in Bloomington, Ind. A year later, he joined his school's jazz band and began listening to albums by Miles Davis and Buddy Rich. 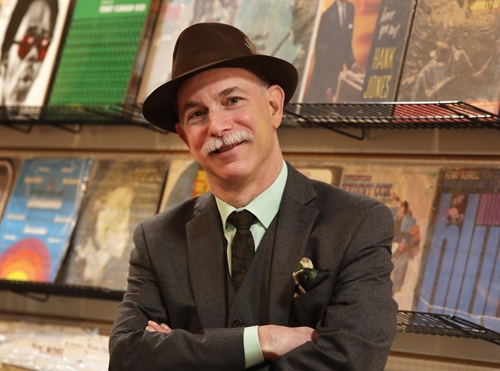 Mark Stryker with some of his 6,000 records. (Photo: Donald Dietz)

"I started reading about the music, devouring liner notes and memorizing who played with whom and who was on what records," the former journalist recalls in a blog interview about his book with Ethan Iverson, an acclaimed New York jazz pianist and composer.

When I turned 13, my parents gave me a subscription to Downbeat [magazine]. On my 15thbirthday they gave me "Jazz Is" by Nat Hentoff.

That book changed my life. It made me want to write about the music, because I was so captivated by how Nat wrote about Ellington, Bird, Trane, Miles, Lady Day and the rest. . . . There are definitely parts of Nat's book in my book.

His 358-page hardback from the University of Michigan Press dives into "the city's profound influence on jazz over the last eight decades," the 55-year-old Plymouth writer says in its preface.

It identifies stylistic traits and attitudes that define a distinctly Detroit approach to the music. . . .

Detroit has been indispensable to the history of modern and contemporary jazz. From the mid-20th century until the present day, the city has been one of the primary feeders of talent to the national scene.

Stryker, who owns 6,000 records, including vintage 78 RPM vinyl LPs from his dad's collection, has chapters on 26 musicians with roots in the local "jazz juggernaut," as he dubs it. They include Marcus Belgrave, Regina Carter, Rodney Whitaker, Joe Henderson, Geri Allen, Kenny Burrell, Sheila Jordan, Charles McPherson and other internationally known players. 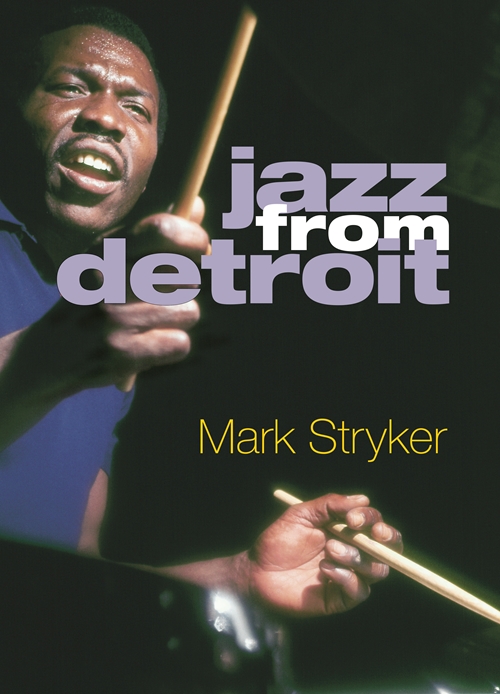 "These were giants of American culture, who created this magical art because of — and in spite of — conditions," the first-time author tells Iverson, who visited his Wayne County home. "These musicians and this art form represent America at its best."

Among Stryker's storytelling challenges, besides making tough calls about who gets a chapter, were "to get on paper as much of the nuance as possible about the music and history and still write with clarity and style," he says in the recent interview. "I want to be as accurate as possible, but also communicate to a broad audience as well as experts. And I want to be fun to read."

His book, which has 35 photos and is available for Nook and Kindle e-readers, is presented in six sections by themes – such as "The Golden Age,1940-60," "Self-Determination in the 1960s and ’70s" and "Marcus Belgrave and His Children."

In a cover blurb, guitarist-composer Pat Metheny calls it "a definitive testament to the musical culture of Detroit."

► Part 2: Moving to Detroit in his early 30s felt like "living on hallowed ground," the author writes in a book excerpt. 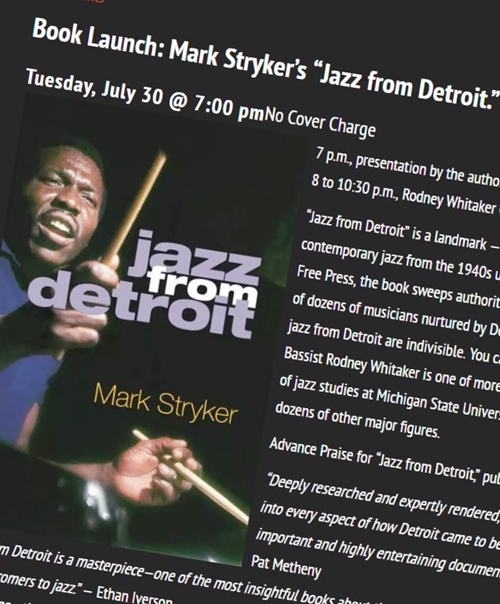 Where to get 'Jazz from Detroit'