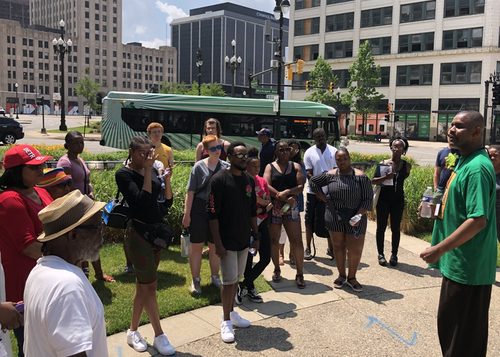 This repost from July 11 is the second in a Top 10 countdown of high-impact 2019 articles, a daily series through New Year’s Eve. Choices are based on readership and staff selections.

July 4, Independence Day, dawned sunny and promised all the heat that comes with it. Somewhere in faraway Washington D.C., aides were sweating over a final draft of the president’s July 4 speech. Checking Wikipedia, inserting pronouncer guides for the tough words (“Cornwallis,” “Fallujah”) and crossing their fingers for a good delivery.

Here in Detroit, I took a different walk through American history – a literal one. “Enemies of Freedom: Monuments of Detroit’s Slaveowners” was a strolling tour of bronze statues and historic markers downtown workers pass by every day, usually without a glance. After a while, a man rendered in Colonial-era dress is just another thing for pigeons to poop on, after all; who cares what the Macomb family did to get a county named after them? 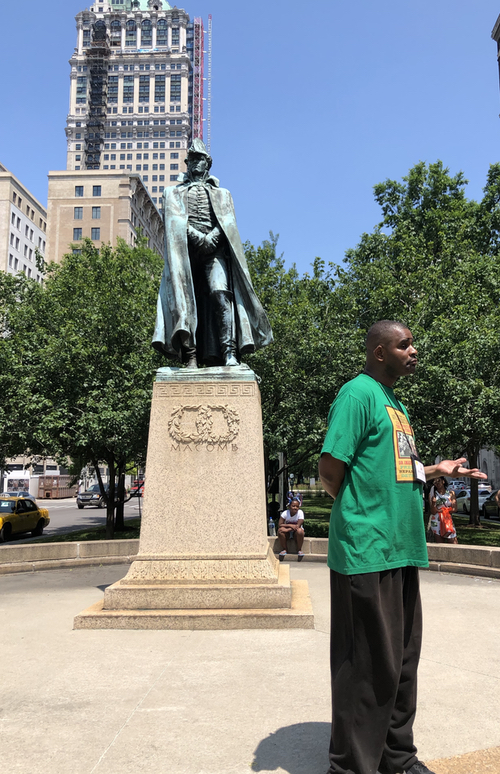 Jamon Jordan cares. The Macombs were “Michigan’s biggest slave holders,” he told the 30 or so people willing to stand under the broiling sun to learn a little local history. They owned Belle Isle and Grosse Ile, and they didn’t work their farmland by themselves. About 40 human beings, wholly owned by the family, worked with them.

It was a long, sweaty but ultimately very enlightening walk.

Skeletons in the closet

As Bill McGraw pointed out in Deadline Detroit seven years ago, slavery is part and parcel of Detroit’s early history, but it’s a fact that’s only recently come to light. Americans have short memories and prefer simple narratives, which means that in this country, we think of slavery as something that existed only in the south, on the large plantations there. But as Jordan told us at the beginning of our walk, “Slavery is not a southern story. It’s a national story.”

And it’s a Detroit story. Though the Northwest Ordinance, adopted in 1787, banned slavery in the territories it covered (which included Michigan), British and French citizens were permitted to keep their human property, and did. And that is how so many familiar names, ranging from the Macombs to the Beaubiens to even Lewis Cass himself counted enslaved Africans in their households, Jordan said.

These individuals did not conform to the “Gone With the Wind” image, Jordan told us. The ribbon farms of the early settlements didn’t require vast labor forces. Rather, these Michigan slaves worked alongside white settlers, doing many of the same tasks, but keeping none of the wealth gained from their labor.

We took a winding route from Campus Martius west to Cobo Center, and east to St. Antoine, stopping along the way to regard the sites of events few would commemorate with a marker – a cross-burning on Independence Day, 1923, in front of the old City Hall; the Archdiocese of Detroit offices, a reminder that early priests owned slaves (and baptized them); the monument holding the remains of Stevens Mason, the first governor of the state of Michigan (there were a couple who served the territory, ahead of him), scion of the Masons of Virginia, slave owners, and one himself.

Some of this might have been illegal, Jordan noted, but on what was then a frontier, in a time before mass media, who was going to do anything? Likely every slave on Monticello knew about Thomas Jefferson and Sally Hemings, and likely everyone in Detroit knew the status of Lewis Cass’ servants, but what was the recourse?

We walked on, and stopped at the old Free Press building. From the murmurs in the group, many did not know that this reliably liberal newspaper was founded to be pro-South, pro-slavery, and helped incite a race riot in 1863, after a mixed-race man was wrongly accused of molesting two young girls. From there it was into the footprint of the original Fort Pontchartrain du Détroit, where the first St. Anne’s church was erected within the walls. Today, the Church of Scientology stands on the site, proving...something. But that’s another story.

And weirdly enough, even though I was dripping sweat and tired of trudging, I started to feel a little bit better about my country, even in its current dire straits. Nothing like a dose of history to make you see the long view, and to consider just how blood-soaked the soil that we walk on every day is. You can be pessimistic and consider how man hands on misery to man, how we have to learn the same lessons over and over, how we can’t ever seem to get it right. Or you can look around and reflect on what Martin Luther King Jr. said, that the arc of the moral universe is long, but it bends toward justice.

My husband and I peeled off in Greektown. The tour was running long, the heat was relentless, we were hungry and that was the only neighborhood where we’d be sure to find an open restaurant that served cold beer and sandwiches.

By my reckoning, we were sitting somewhere on the land once owned by the Beaubien family, slave owners. At the next table, a family almost certainly descended from enslaved Africans. Everybody was glad to be in the air-conditioning, eating barbecue, drinking draft beer. In Washington, the president was introducing the novel concept of Revolutionary War airports to our ever-deteriorating public discourse. In the paper that morning, an Oakland County judge had proclaimed that the reason fewer Americans feel “extremely proud” of their country these days is because we talk too much about stuff like slavery, and should spend more time on “American exceptionalism.”

I pushed these things from my mind and waited for my sandwich and beer.  Sometimes, when the arc of the moral universe is hard to see, you just have to concentrate on lunch, and, as the city’s motto says, hope for better things.

Note: I found the tour, which was free, via Black Scroll Network History & Tours. I recommend you follow them on social media and take one in the future. -- N.D.