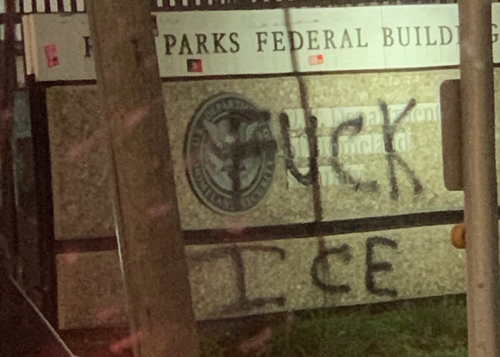 Protests at U.S. Immigration and Customs Enforcement offices in Detroit reached a new level with this recent vandalism at the offices on East Jefferson Boulevard.

The graffiti, visible above, follows a similar incident last month at state Republican headquarters in Lansing.

With raids by ICE officers occurring around the country, aimed at undocumented immigrant residents, protests have increased in Detroit and elsewhere. Crowds gathered last week at the East Jefferson facility, calling for an end to deportations and protesting the family-separation policy at the southern border.