Welcome to Detroit, Democrats -- Now, Let's Have a Drink 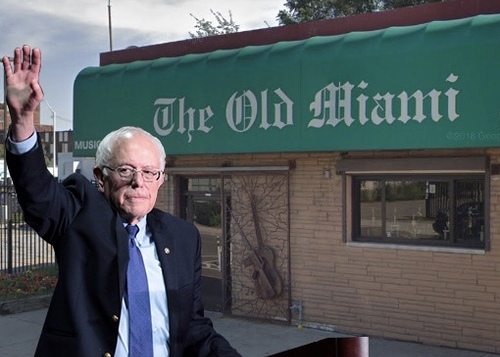 Welcome to Detroit, Democrats! To the candidates, their staffers and the inexplicable number of camp followers who actually go to presidential debates like they’re Marvel movies, we’re happy to see you here in America’s most interesting city.

No doubt you have advance teams telling you where to go. Disregard them. Deadline Detroit offers all the advice you need.

And here’s our first piece of it: Stay away from Dan Gilbert’s organization (except to ask for money, of course). Anytime a well-known individual comes to town, someone from Gilbertville scoops them from the airport and immediately takes them deep into the heart of the billionaire’s Nü Detroit lair and doesn’t let them out until they’ve tweeted something about how wonderful Campus Martius is.

All of the above applies to Shinola, too. No, they are not saving Detroit. You can buy a notebook in a drugstore.

But we’ve given your visit some thought, and we have some ideas about where you might want to go and be photographed.

We recommend you go to a bar.

Detroit is not a teetotaling town. Maybe you are. Doesn’t matter! You should still go to a bar. You don’t have to lecture anyone about drinking and driving. You can order a Diet Coke. But if you want to rub elbows with the locals, you won’t do better.

Like most cities that aren’t named Salt Lake, we have a wide variety of watering holes, some of which are still authentic pieces of Detroit, which is to say, the bartender will not take any of your shit.

We’ve sorted them by candidate. 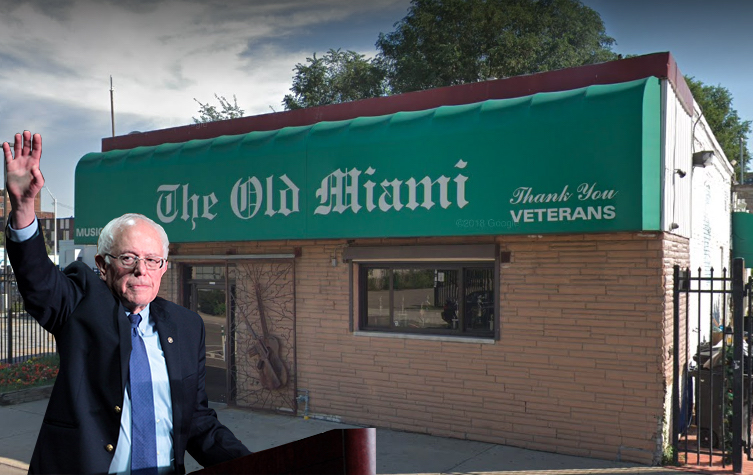 Bernie Sanders, go immediately to the Old Miami. It just seems like the perfect place for you. No pretentiousness. What you see is what you get.  Walk through the bar and into the back yard, which is spacious and should be well-stocked with your people. Find a seating area and start offering your policy positions on Medicare for all and free college. A large crowd will gather around you. We’ll be the ones offering the “didn’t we tell you” thumbs-up on the outer perimeter. (Don’t trash-talk the military, though. “Miami” is an acronym for “missing in action Michigan.”)

Elizabeth Warren, tell your driver to head for Baker’s Keyboard Lounge, just south of 8 Mile, the road Eminem made famous. You seriously need to beat some of that Waspy New England-white out of you and shore up your support with African Americans, and you will find some there.

Joe Biden, you’re a grandpa who’s said some shitty things about millennials — but we think you can win back at least a few by stopping by The Brakeman in downtown Detroit and challenging them to a game of beer pong. They’ll look at you, smile and then sidle away, texting. Mission accomplished, gramps!

No, Pete Buttigieg, we’re not going to recommend you go to a gay bar. We want to see you go anywhere, really, because you’re gonna get carded and that will be hilarious. Maybe stick to the coffee joints.

Beto O’Rourke, set your GPS for PJ’s Lager House in Corktown. Yes, Jack White once stood on that stage, as did the Black Keys and many, many others; you should find that impressive, even though your band was never in that league. The crowd is friendly and will be nice to you. You need people to be nice to you, these days. Just don’t stand on the bar or say you were made for this race. Remember, it’s not called BS’s Lager House.

Marianne Williamson, we assume you’ll be relaxing with hot vinyasa yoga followed by wheatgrass shots, but you’re the only one of this crew with a legit Detroit connection, even if it is to Grosse Pointe Farms. See you at the Ye Olde Tap Room in the Park. Go ahead and throw your peanut shells on the floor.

Cory Booker, you like to talk a lot about all the gunfire outside your $500,000 Newark home, but we’ve read that your neighbors never see you there. We’d advise you actually get acquainted with the streets by visiting Legends, the downtown strip club outside of which a deadly shooting occurred last month. You may even meet a real-life T-Bone, and never again have to bring up your imaginary drug dealer friend of the same name.

Kamala Harris, we’d tell you to go to Rocky’s Road Brew, the Southwest food truck that doesn’t serve cops, just so we could see you get turned away — but we’re not sure they’re still around after offending the Blue Lives Matter set. Back-up plan: Give the people a break and venture north of 8 Mile, to Ferndale. Detroit could do without someone who arrests parents when their kids miss school.

Kirsten Gillibrand: An on-brand freebie for you, the dainty woman who loves to remind us she drinks whiskey. Enjoy that tired tough gal trope at Nancy Whiskey in Corktown.

The rest of you no-names can hop on a pedal pub and wind through downtown, hollering about your inevitable demise. It’s just like the clown car you came to town in — only open-air.

We weren’t going to mention food, because in this context it’s super-boring. But if you’re drinking, you’ll probably be having a nosh, and in Detroit, a nosh comes with a warning.

Prepare yourself: You’re going to have to eat a coney, and you’re going to have to pretend it’s the best thing ever, and it’s certainly better than an Iowa State Fair corndog, but make sure your body person carries breath mints and maybe some Pepto-Bismol, just in case. Also, the choice will be between Lafayette and American, and yes, you’ll be expected to have an opinion about which is better. Get staff to brief you.

Us, we’re out for now. After all of the above, we're a little thirsty.