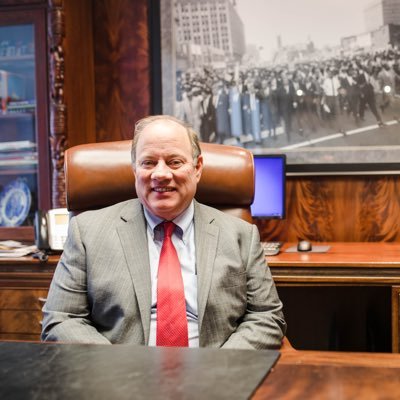 So Beto had French toast and Anderson sampled the shaved ice. Bernie went to the nail salon and Liz took selfies in Corktown. And Kamala? She couldn't get a table. Welcome to the new Detroit, madam.

The media calliope has made its way to Motown, cranking out hot gas and platitudes during this week's Democratic presidential debate festival.

But where was Mike, Captain Comeback? Mayor Mike Duggan, the boss of the Democratic machine.

You'd think he'd be on display, riding around on a homecoming float with balloons and a lemonade tank, boasting about the comeback city that is front and center this week, playing host to his own party. Instead, the question is: Where's Waldo? He's acting as if he's  persona non grata in his own town.

Sure, he was spotted at the debate Tuesday night, but he barely stood out among the thousands in attendance. And he made one quick appearance on CNN.

The other day Trump pointed his Twitter cannon directly at Baltimore -- not Detroit. Don a l'orange called Charm City a rodent's den of corruption and incompetence. And so the media was forced to turn its lazy eye on Baltimore.

And so maybe it's for the best that the mayor of Detroit keep his head down.

As we speak, and the candidates talk over themselves about things they cannot realistically accomplish, there is a public corruption grand jury convened over the mishandling of $250 million in federal funds sent to the city for its once ballyhooed demolition program. Now when we talk of that program, and the contractors, we use words like bid-rigging, collusion, price splitting, something Trump, if he wanted to, could use as more fodder to attack another Democratically-controlled city.

The program has been run so incompetently, that a home once used as a torture chamber by a suspected serial killer still stands, becoming something of a tourist attraction and community art project.

There is no doubt that the city administration's program on demolitions and its contractors is squarely in the federal crosshairs. The local media hardly writes of this, because they don't wish to write of this (see Baltimore).

And then, it appears the mayor's staff deleted emails, when questions arose about grant money steered to the mayor's gal pal while the mayor had access to her suburban garage door opener.  The feds, I'm told, are also digging into the details of how the mayor assembled the property for the new Fiat Chrysler plant on the east side of the city and whether friends benefited.

Mike's got a long history with the federal corruption types. There was that $30-million fine from the Justice Department for fraud and kickbacks when he was head of the public hospital system. Then there was the long investigation into the airport contracts.

A member of Mike's inner circle was sipping cocktails and laughing it up at the debate Tuesday night with indicted City Councilman Gabe Leland, who allegedly was caught on an FBI wire soliciting bribes. (Go home Gabe. It's over.) Mike's chief financial officer was the man who put the financing together on the doomed Flint water deal.

Some citizens surmise that Trump leaves Duggan alone because Duggan is a white man. I suspect, however, that Trump picked on Baltimore because it is home to Congressman Elijah Cummings, a black man and a perpetual pain in the ass of His Orangeness. The Don picks on Maryland, because Maryland is safely in the blue column.

Not so in Michigan. Here, Trump beat Clinton by just 10,700 votes, and Mayor Mike was Hillary's point man in the Great Lakes State. (Take note, Uncle Joe.) There is a mathematical needle to be thread here. Best to tread lightly.

Time for a reality check

Democrats: if you want to win Michigan, its best to take a long, hard look at how we're living. Ripping on the Orange Orangutan won't be enough.

Our roads are the worst in the nation, as is our power grid. There were 149 shootings in Detroit during the first month of summer. Cops are paid like bell hops in Detroit and are leaving in drovesre for jobs elsewhere.

If you want to call it Comeback City, then talk to residents who are now being taxed for rainwater, while billions in public dollars – some of it public school money –  is diverted to private developers who donate to Mike. Go to Flint, and watch the civil war there as city Democrats accuse each other of corruption and cronyism over the pipe and sidewalk repair contracts.

Democratic candidates talk about free college for everybody, when we can't figure out how to run successful grade schools in Michigan.

We who live here are left to scratch our heads, and Mayor Mike continues to duck.