Most of the protests around the Democratic Presidential Debates in Detroit were kept outside the Fox Theatre, but one broke out inside the hall Wednesday night, causing a brief pause in the onstage activities. 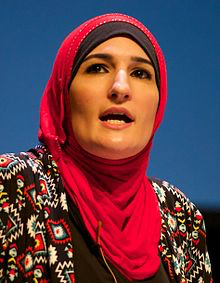 Viewers watching on TV saw New Jersey Sen. Cory Booker be asked to wait while security removed the disrupters, who were chanting something hard to make out, from the theater.

(New York Mayor Bill de Blasio) is under fire for declining to support demands by Eric Garner’s family for the police department to dismiss New York Officer Daniel Pantaleo. Garner died at the hands of the officer, sparking national outrage.

... About an hour into the debate more people were removed from the 5,000-person audience for chanting "3 million deportations," and holding up flags while Biden was speaking.

The News ID'd the protesters as including Rev. Kirsten John Foy, Linda Sarsour, Mysonne Linen and Tamika Mallory. Sarsour is a well-known Muslim activist from New York who helped organize the Women's March after President Trump's inauguration in 2017.

We did NOT interrupt @corybooker, it was the Detroit Police Department that interrupted Booker and the debate to intimidate peaceful protesters for standing up for the dignity of Black life that had already completed protest minutes ago. This is our right. We won’t be silent.

Earlier in the day, a group was arrested for briefly blocking the Detroit-Windsor tunnel entrance on East Jefferson.