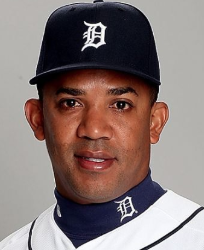 Octavio Dotel, a former Detroit Tigers pitcher who threw for the team in the 2012 World Series, is one of 18 people charged in the Dominican Republic with being part of a major drug trafficking and money laundering ring, the Associated Press reports.

Dotel pitched for 13 teams, including the Tigers, in a 15-year career. Another player -- Luis Castillo, a three-time All-Star who played from 1996-2010 -- was also indicted Tuesday in what authorities call a drug network known as César "Emilio Peralta" and "César the Abuser."

Dominican Attorney General Jean Alain Rodríguez called it “the most important drug trafficking structure in the region,” in a news conference.