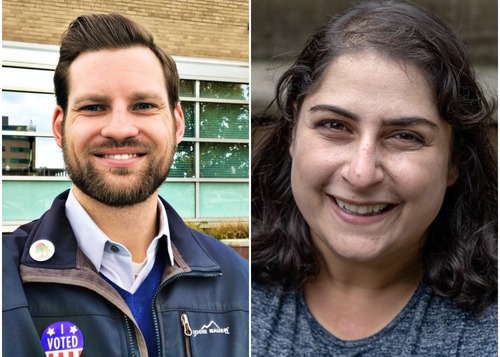 L. Brooks Patterson's replacement by former Ferndale Mayor David Coulter has ignited a battle for the top job in the liberal city — one that a socialist hopes to win.

Brian Stawowy, a 31-year-old Ford engineer and activist with the Greater Detroit Democratic Socialists of America, on Saturday kicks off a campaign to focus on housing affordability and the environment. He'll be running against Melanie Piana, 46, a longtime city councilmember who resigned this month to run for mayor.

Another DSA member is seeking one of three open council seats. Nada Daher, 32, is a tech at Beaumont Hospital and a Lebanese refugee who emigrated to the U.S. as a child.

The campaigns come with the city at a crossroads perhaps best summed up by a "Don't Royal Oak My Ferndale" sign posted last year. Once solidly working-class, Ferndale has in recent years seen real estate prices soar and the development of several new luxury loft and other housing projects.

“As the daughter of Lebanese refugees, I know what it’s like to be forced out of your home because of things you can’t control," said Daher. "I don’t want to see that happen here.”

The candidates' goal is to reign in luxury development and prevent displacement. They've both pledged to refuse campaign contributions from developers.

They'll also seek to implement a "Green New Deal for Ferndale," which would, among other things, make all municipal buildings carbon-neutral and waste-free by 2030.

The general election is Nov. 5. There is no primary.

Stawowy and Daher are to introduce themselves to voters Saturday with a canvas and community barbecue. The barbecue begins at 2 p.m. at Geary Park on Pinecrest north of W. Nine Mile.