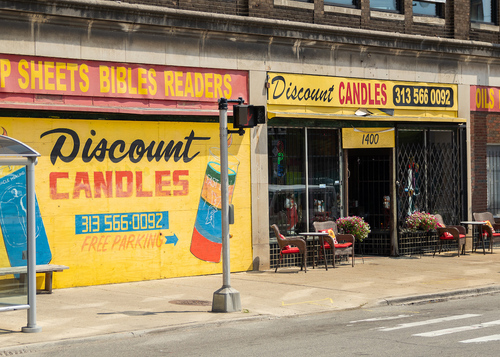 After more than 20 years at the corner of Russell and Gratiot in Detroit, Discount Candles is moving down the block after being pushed out by a new landlord.

It’s the latest round of shuffling in Eastern Market, where big-monied investors have snapped up dozens of properties for millions in the past couple of years, prompting a flurry of business closures and relocations. Discount Candles says it was forced from its space when real estate investor Manoj Manwani sprung on it a nearly 500 percent rent increase.

Manwani bought the Viola building that houses the candle shop for $2 million in 2017, with plans for a $1 million renovation. This summer, he told the business a prospective tenant was willing to pay $8,700 per month for the space, plus $50,000 in renovation costs. The candle shop had been paying $1,500 a month in rent under a handshake lease with the previous landlord, shop owner Star Lamar told Deadline Detroit.

“He strung us along,” Lamar said of Manwani. “We were waiting on a lease until some people came in and said they were here to look around my building … then he dropped the bomb on us.”

The business — which sells prayer candles and other spiritual items — was given 30 days to pack up and leave the 7,000 square foot space. Lamar and then co-owner Donna Adams refused, prompting Manwani’s LLC to sue them and the business for nearly $20,000 in July. The case was dismissed.

Manwani declined a request for comment through his leasing agent, Steven Silverman.

In a bit of a plot twist, the building is owned by Sanford Nelson — the controversial landlord who’s been the face of change in Eastern Market. More than a half-dozen businesses have closed for various reasons since he purchased their buildings in 2018.

The latest mainstay to leave the market is Russell Street Deli, which closed Saturday after a dispute with Nelson over a $50,000 repair.

SMPLFD left this summer for Detroit's Island View neighborhood because it had "outgrown the space," Nelson's FIRM Real Estate said.

Lamar says Nelson offered her a reasonable lease, though she nor FIRM would disclose its terms. Eastern Market Corporation president Dan Carmody brought the business and landlord together.

“I know other people have had bad experiences but they’ve been very good to us and respectful,” Lamar said of Nelson and his team.

The candle shop's new location is listed as 1480 Gratiot on a map, but will appear as 1484. A media release from FIRM says Lamar “preferred the number combination.”