Video: 30 Years Ago in Detroit, N.W.A. Members Were Arrested for Singing 'F--- Tha Police' at The Joe 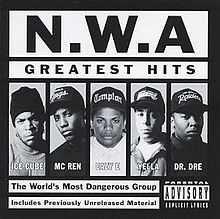 The 30-year-anniversary in June passed quietly.

Three decades ago, Detroit Police arrested members of the rap group N.W.A. after they defied warnings by police and sang "Fuck tha Police" at a Joe Louis Arena concert. Police were concerned it might trigger violence.

We thought the anniversary is worth noting -- better late than never -- after we came across the six-minute clip below from a 2015 biopic movie "Straight Outta Compton," which dramatizes that slice of Detroit history.

The film, worth watching, takes some liberties with history.

It shows cops arresting the group, including Ice Cube, Eazy-E and Dr. Dre, outside the arena in front of rioting fans. The rappers made it back to the hotel and were arrested later when they made their way to the lobby to supposedly meet up with women. No one was charged.

"They took us into this little room.," said Ice Cube in a 1989 interview. "All they did was talk to us. They told us they wanted to arrest us onstage to front us off in front of everybody to show that you can’t say 'Fuck the police' in Detroit."