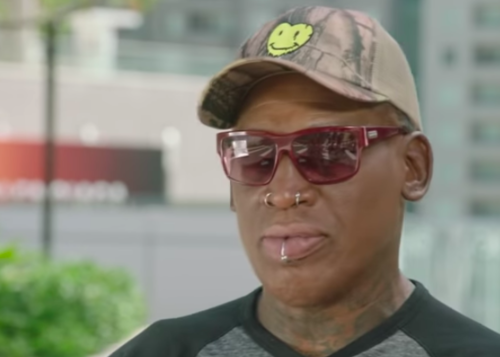 "I didn't expect teams to just trade players and ... say, 'OK, this is a business.' That was what drove me to that point."

Basketball Hall of Famer Dennis Rodman recounts his turbulent time with the Detroit Pistons in an ESPN documentary released this week.

Rodman was drafted by the Pistons out of college in 1986 and made a name for himself during the "Bad Boys" era, helping the team to back-to-back championships. But he suffered from periods of emotional instability in the '90s, following the resignation of his beloved head coach, Chuck Daly.

A "30 for 30" installment on Rodman, aired Tuesday night, chronicles the downward spiral that culminated in a suicide attempt outside the Palace in 1993.

Rodman spoke this week to Bleacher Report about the incident and how Pearl Jam may have saved his life.

"I wanted to be loved by somebody or someone because I was never loved by my mother or father because they were never there. So when I got to Detroit, they embraced me as one. And then when things started to disassemble [after the Pistons' Bad Boys run], I started to feel betrayed. I said, "What the f--k's going on?" I was so enamored of the way that they loved me and being embraced by the people in Detroit. So once a lot of the people that loved me were gone, and [former Pistons coach] Chuck Daly was gone, I was all by myself. I had nobody to turn to.

... So one day, I wrote a note and went to the parking lot of the Palace. I had a gun rack, and I had a gun in my car. I had it in my hand. But for some reason, I played this music. I put it on, and I was listening to this song and this music, and I was just debating. It didn't have anything to do with basketball. It had to do with this love that I wanted, and it suddenly just left me.

And this song came on. It was Pearl Jam. "Even Flow" and "Black" and stuff like that. And I had the gun in my lap, and next thing you know, I fell asleep listening to Pearl Jam. Then I woke up, and all the cops and everyone was there. I didn't know what was going on. I totally forgot I had a gun in my hand. They got me out of the car. That was pretty much what it was. It wasn't about the game of basketball. It was about feeling betrayed, because I wanted to be loved so much in my life. And when I got to the NBA, I didn't expect the NBA to be like that. I didn't expect teams to just trade players and you say, "OK, this is a business," and forget about it. That was what drove me to that point.