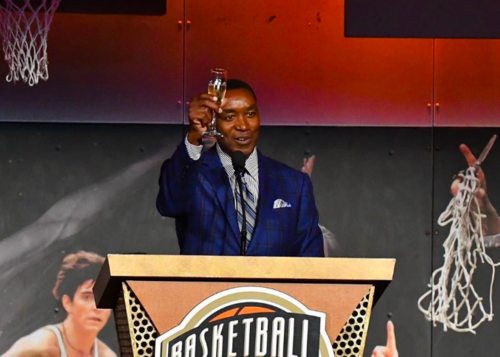 Former Pistons and NBA Hall of Famer Isiah Thomas is known for having popped a bottle or two in his championship-winning days, but he didn't like like way the high sugar content of bubbly left him feeling.

So goes the official story of how Thomas, now 58, came to found a champagne company, Cheurlin, in 2016. Now, that company — which previously only sold in France — is crossing the pond to debut in U.S. Meijer and Kroger stores.

The champagne is the result of a partnership between Thomas, CEO of Cheurlin Imports, and the Cheurlin Vineyard in France. The parent company, Isiah international, is based in Chicago.

In a media release, Thomas touts the various bottles' low sugar and sulfite content, saying Cheurlin doesn't come with the headache or hangover typical of some other champagne brands.

Forbes detailed the evolution of the concept in a piece last year:

According to Thomas, his Cheurlin Brut Speciale, (which won a double gold at the 2018 New York International Wine Competition) is the lowest sugar brut on the market. Most brut Champagnes hover around 8 -10 grams of sugar per liter. The Brut Speciale is 5 grams (which equates to less than a half teaspoon per glass). Winemaker and owner of Cheurlin Champagne, Thomas Cheurlin, confessed to being surprised at Isiah’s insistence on less sugar. “My impression of the American market was that they loved sugar, and sweetness would sell,” says Cheurlin.

Thomas is convinced the American consumer simply has not had enough exposure to lower sugar Champagnes to make a fair judgment. And, doubling down on that theory, Thomas is also importing two zero dosage, or zero sugar offerings (Cheurlin Thomas Célébrité Blanc de Blanc and Cheurlin Thomas Le Champion Blanc de Noir). Says Thomas, “I wanted to craft a low sugar, low sulfite Champagne because I want to enjoy more Champagne and less headache. And, the athlete in me wants to be able to work out the next day."