Nugent blows through Lansing to support baiting for hunters

An obviously starstruck GOP welcomed 70-year-old rocker Ted Nugent to the Michigan Legislature Tuesday, referring to him as "Uncle Ted" and inviting his testimony on the state's ban on hunting deer and elk with bait piles. 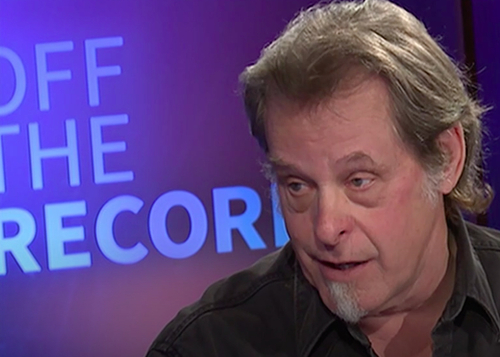 Ted Nugent in an earlier appearance on "Off the Record." (Photo: WKAR)

Nugent offered the sort of incisive, focused expert opinion one would expect from Michigan's most high-profile hunter, deriding state officials who support the ban as "liars" and "idiots."

"If they think they can stop deer from swapping spit, they're idiots," Nugent said during a House Government Operations Committee meeting.

... The bill introduced by Rep. Michele Hoitenga, R-Manton, would reverse a 2018 ban that was put in place to address concerns that chronic wasting disease was spread through bait piles. It’s not clear the science used to push that ban is reliable, Hoitenga said.

The controversial and conservative rock musician came to Lansing Tuesday to expound on his love of hunting on property he owns in Jackson and up North, bringing up the names of fellow rock stars such as guitar legend Jimi Hendrix.

“Jimi got high and he’s dead. I went hunting and I’m still Ted,” he said.

Nugent's testimony was countered by Amy Trotter, executive director of the Michigan United Conservation Club, who spoke in favor of the ban. Presumably Nugent was able to restrain himself from calling her a "worthless whore," his description of California Sen. Dianne Feinstein.