MT critic on Detroit's Monarch Club: Visit for the views, stay for the cocktails 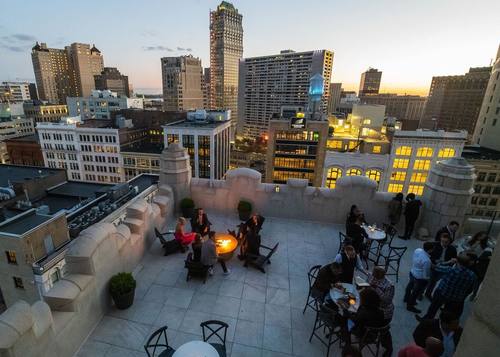 Much has been said of the view from downtown Detroit's Monarch Club, the patio bar atop the Metropolitan Building that opened just in time for summer. Metro Times says a lot in its new review of the place too, but it was the alt-weekly's dive into Monarch's food and beverage offerings that made us text a friend "I wanna."

Reviewer Jane Slaughter writes that the cocktail menu harks backs to the "glory days" of the Metropolitan — which now houses the Element Hotel.

The first page of drinks is indeed mainly old-school — old-fashioneds, sidecars, martinis, and daiquiris (lime, not strawberry) — and the second is where the mixologist spreads his or her wings. Greek yogurt, of all things, finds its way into the Violette Tendencies cocktail, along with aquavit and crème de violette. For a Skeleton Key, the bartender floats Angostura bitters atop bourbon and ginger syrup, a nifty trick. El Jimador is infused with serrano peppers and mixed with mezcal and passionfruit syrup for El Diablito. You get the idea: combinations it took a lot of sampling to come up with, and more power to the samplers.

I enjoyed Fever Dream in a Mexican Airport far more than I would have enjoyed the same IRL — tequila, Ancho Reyes (a liqueur from ancho and poblano chiles), crème de cacao, and lemon. It wasn't aggressively spicy, nor was it chocolatey; just pleasant and kind of small.

Dishes Slaughter gives a thumbs up include a "pizza-like flatbread topped with arugula, Italian sausage ... garlic confit, goat cheese, fontina ... and best of all, roasted pears" and a variation of poutine "with a lot of stretchy cheese over tater tots" and brisket.

This isn't our first post today about the grand offerings of the Element Hotel. There's some news from the ground level too.