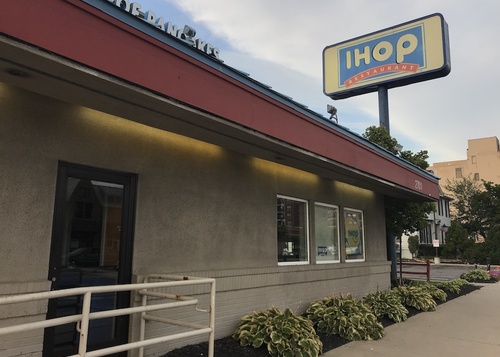 The New York Times called the IHOP "a sparkling novelty and symbol of hope" when it opened in 1995. (Photo: Violet Ikonomova)

The legendary Jefferson Avenue IHOP that was once a hotspot for Detroit's power brokers has quietly closed.

The restaurant shut permanently when its lease expired Sept. 15, a notice in its window says. The business and building had both recently come under new ownership.

New York-based Chenega IH, LLC earlier this year purchased it along with the 14 other standalone IHOPs in metro Detroit. Local businessman Saber Ammori bought the Rivertown building for $1.6 million in January.

Developed in 1995 by songstress Anita Baker's then-husband, Walter Bridgforth Jr., the IHOP was the first national family-style restaurant chain to open in downtown Detroit in 25 years. An Associated Press report at the time described it as "a sparkling novelty and symbol of hope amid the vacant lots and boarded storefronts that dot this troubled city."

Politicos, developers and community leaders frequently met there. Motown music played and Anita Baker's records and images were on display. According to an old New York Times report, in 1995, the IHOP had the highest sales among the chain's Midwest locations.

But bringing the pancake house to Detroit was no easy feat, The Times explains:

For about two years, Mr. Bridgforth, like his wife a Detroit native, lobbied the headquarters of International House of Pancakes in Glendale, Calif., to put one of its more than 600 restaurants in downtown Detroit. Mr. Bridgforth believes the chain balked because "it was the excuse for the fear of crime in urban communities." Finally, the day after Mr. Bridgforth threatened to sue, the company agreed to his plan. Mr. Bridgforth agreed to hire a security guard for the restaurant during evening hours.

Bridgforth's effort was locally controversial, however, as construction of the IHOP reportedly required the demolition of a historic house. The city rescinded an initial demo permit that was issued to Bridgforth and Baker in error, but a year later the Detroit Historic Commission approved a new demo request in the last minute and with no notice for public input, according to Curbed.

We were unable to immediately reach the new franchise group to learn exactly why the restaurant closed. 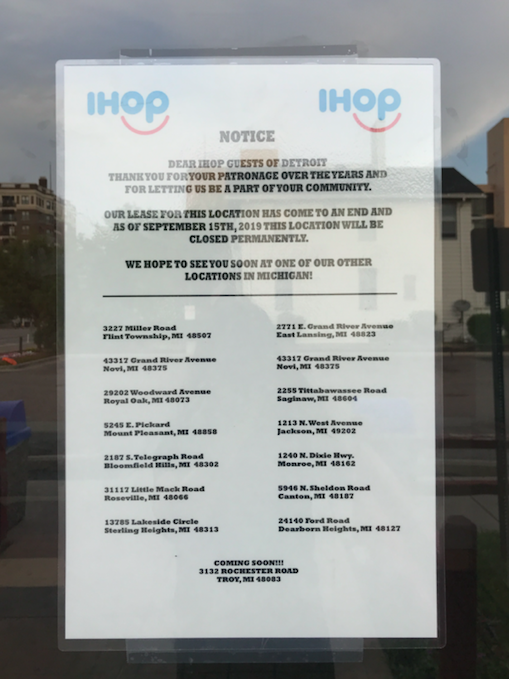 "Thank you for your patronage over the years and for letting us be a part of your community." (Photo: Violet Ikonomova)

The building owner, Ammori, says he had not planned to raise rent on the business and that the new owners never approached him about renewing the lease.

Ammori says he hopes to bring in a new restaurant "as long as it’s reputable," but would also be open to other development.

A new IHOP-Applebee's combination restaurant opened about a mile away last year at the Millender Center.