The author, a Detroit freelance writer, is a former Detroit Free Press reporter. 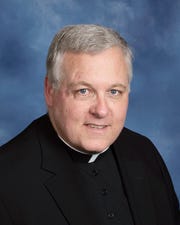 In the first trial of a priest swept up in Attorney General Dana Nessel’s May dragnet, a 31-year-old man man gave dramatic graphic testimony Thursday, detailing how he had sought to confess his sins to Patrick Casey but instead the priest shocked him by initiating oral sex in January 2013.

The victim testified that he was so convinced he was headed for hell, because of homosexual urges, that he broke up with his boyfriend of six years and attempted suicide just before the encounter in Casey’s church office in Westland. The man was in his mid-20s at the time.

The case is one of seven charged to date based on more than a million documents seized by the attorney general last October from all seven of the state's Catholic dioceses. In May, Nessel rounded up priests nationwide and charged them with sex crimes in various Michigan courts. The Casey case differs from the others because it does not involve a minor victim and is based on a relatively recent incident. (The others involve priests who left the state after allegedly abusing minors decades ago.)

The John Doe who testified in Wayne County Circuit Judge Wanda Evans’ courtroom was converting as an adult to Catholicism and spent six months seeking spiritual and personal counsel from Casey, who was transferred during that period from St. Thomas a'Becket in Canton to St. Theodore in Westland.

He knew the church condemned homosexuality and became troubled, he said on the witness stand, just by looking at the bodies of strangers on the street or sitting in certain positions. Because Casey was aware of the victim’s anxious state, Assistant Attorney General Danielle Hagaman-Clark told jurors in her opening statement:  “This case hinges on one word — coercion.” She charges Casey abused his authority in the case.

Defense attorney Stephen Rabaut admitted to jurors that there was sex but maintained it was consensual. In his cross-examination, he got the victim to agree that he didn’t back off or say no and that he initiated reciprocal oral sex. But the man, who is now a 31-year-old counselor himself, says he did only what he thought Casey wanted so he gave in, hoping it would end quickly.

Casey, 55, is a 1997 graduate of Sacred Heart Seminary in Detroit. He is charged with third-degree criminal sexual conduct, which carries a possible sentence of 15 years.

Deadline Detroit is honoring the prosecution’s request that the accuser remain anonymous. He didn’t go to police, but instead talked to a lay minister about the incident in 2015 and filed a complaint with the archdiocese, which launched an internal investigation that resulted in Casey being removed from the priesthood in August 2018. Casey appeared in court in a suit and tie.

Monsignor Michael Bugarin, the archdiocese’s point man on priest abuse cases, took the stand for the prosecution, confirming the victim’s reporting process. Also testifying for the prosecution were the church’s investigator, an abuse victims’ assistance official, the lay minister and an attorney general’s investigator who helped convince the victim to bring the case this year.

“This can’t be happening. I wanted him to stop. …I figured I’d just cooperate,” the young man testified about the encounter, which began with him asking, and the priest agreeing, to hear his confession. A few weeks before, another priest at St. Thomas, Fr. James Slowinski, who was running adult conversion classes, testified that he had spurned the man’s requests for confession because they weren’t far enough along in the curriculum yet for him to participate in that sacrament.

The man, who admitted to suffering mental health issues, said he had sought in periodic conversations with Casey a “loophole” that would help him remain actively gay and be a Catholic. However, he became severely depressed when Casey couldn’t find any. He so strongly thought he was doomed to suffer for all eternity that he said he considered castration. The day after Christmas in 2012, he fashioned a rope and tried to hang himself.

The prosecution rested at the end of the trial Thursday. The case is scheduled to resume Monday with the defense presenting its case. It is unknown whether Casey will testify in his own defense.

Other cases brought by Nessel this year are at various pretrial stages in several jurisdictions.