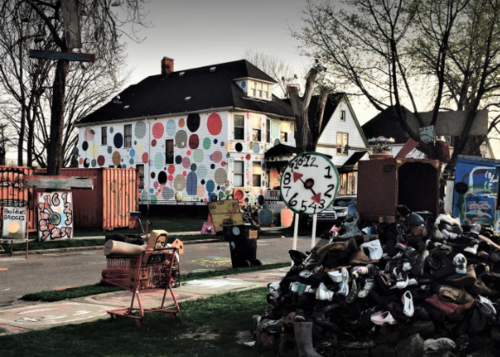 Ever walk around the couple of blocks that comprise Detroit's Heidelberg Project and think, "I want a hamburger?" If so, you're in luck.

The world-famous art installation plans to get into the food business with a burger restaurant, depending on how well a series of upcoming burger pop-ups go, The Detroit News reports. A target opening is reportedly set for spring or summer next year.

According to founders Tyree Guyton and Jenenne Whitfield, Heidelburgers will serve an assortment of burgers developed by accomplished chef and caterer Jeffrie Toney. Besides a traditional beef patty, they'll serve turkey burgers with a bit of spice, and meat-free burgers called Veggie Baby and the Vegan Volt.

Whitfield said the restaurant will be in the Heidelberg neighborhood, which is also home to their new headquarters. They'll host a pop-up event, which is nearly sold out, at the HQ later this month.

It's unlcear what builidng the permanent restaurant will open in; Whitfield declined to tell Crain's. We know only that it'll be in the neighborhood — McDougall-Hunt.