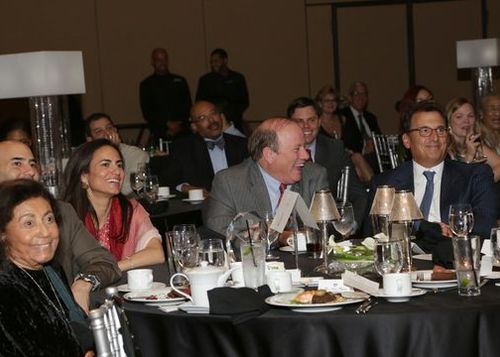 Dr. Hassan, third from left, sits next to the mayPhoto: Make Your Date

The attorney general's office is providing an update on its investigation into Make Your Date, a program at the center of a scandal involving Detroit Mayor Mike Duggan.

A Free Press investigation in March found the mayor steered more than $350,000 in city grants to the pre-term birth prevention program run by Dr. Sonia Hassan, a woman with whom he's been linked, and instructed city staff to fundraise on its behalf.

Update 1: AG Dana Nessel's office says there was nothing improper regarding the registration of the program. There had been debate as to whether it operated as a non-profit or Wayne State University program. The program also didn't pay city staff to raise funds on its behalf.

Update 2: The office is still investigating complaints that city employees were ordered to delete emails that revealed the extent of their fundraising efforts on behalf of the program.

This information comes from the Detroit News.

Complainants have said staff were ordered to delete emails pertaining to the program when the Detroit Free Press, which broke the story, came sniffing around.

That could be illegal.

From a July Free Press report:

General correspondence records — which city emails are often classified as — must be preserved for at least two years, according to the state policy followed by the City of Detroit. The policy states that “records cannot be destroyed unless their disposition is authorized by an approved retention and disposal schedule.”

Furthermore, records cannot be disposed of if they are part of a Freedom of Information Act (FOIA) request, investigation or lawsuit.