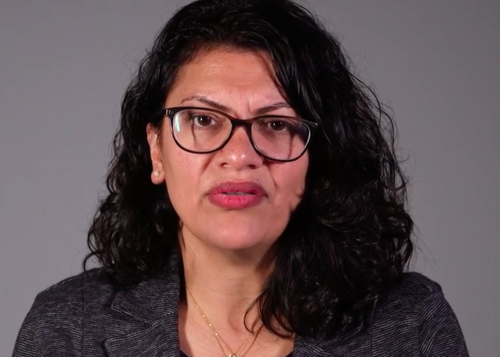 If the Donald Trump administration continues to defy Congressional subpoenas, can House Democrats have them arrested and locked up until they testify?

But Rashida Tlaib – a first-term representative from Detroit – said Saturday that the Democratic caucus has discussed the possibility in conversations during the current Congressional recess.

“If they were to detain someone, where would they go and have them detained so that they can comply with the subpoenas?” Tlaib said in an interview Saturday with Deadline Detroit at United Auto Works Local 600 in Detroit.

“There have been actual serious conversations about what the logistics would look like . . . if we did have to force someone through a court order to come before the Congressional committee. This is pretty uncharted territory for many of us and even for Congress.”

Tlaib spoke after addressing the 13th District Democrats, who also conducted a food drive for autoworkers striking against General Motors.

Audience members asked if President Trump’s Justice Department – headed by Attorney General William Barr -- would enforce subpoenas or contempt of Congress findings against fellow members of the Trump administration during the impeachment inquiry.

“One of the people we held in contempt was Barr,” Tlaib said. “We are using our own legal support, legal experts that are coming in . . . beyond the tainted and conflicted U.S. Attorney [General’s] office.”

Barr ignored his Judiciary Committee subpoena last May, but the mood has changed recently since the House began an official impeachment inquiry amid allegations that Trump and associates illegally sought help from officials in Ukraine to dig up dirt on Democratic presidential candidate Joe Biden.

Tlaib is on the House Oversight Committee, one of five committees investigating Trump.

Trump has warned Congress that his administration will not cooperate.

But that vow wobbled on Friday when Marie Yovanovitch – the former ambassador to Ukraine – defied a State Department order and obeyed a Congressional subpoena to speak behind closed doors with House investigators.

One person scheduled to testify next week is Gordon Sondland, the U.S. ambassador to the European Union, who last week ignored a subpoena on White House orders.

Others set to testify in coming days include Fiona Hall, formerly with the National Security Council, and George Kent, a State Department specialist in Ukraine matters.

Last May, the Judiciary Committee voted to hold Barr in contempt for defying a subpoena to discuss his handling of the Mueller report that investigated Russian meddling in the 2016 election on behalf of Trump, a Republican, over Hillary Clinton, the Democratic candidate.

Shortly afterward, The New York Times published a primer on the subject of such defiance. One of the questions was: What is the punishment for contempt of Congress?

“On paper, defying a congressional subpoena for testimony or documents is a misdemeanor crime, punishable by one to 12 months in jail,” according to The Times. “But in practice, this law is generally toothless in disputes between Congress and the executive branch. Invoking prosecutorial discretion, the Justice Department can decline to charge an official who defies a subpoena at the president’s discretion.”

In a similar report, the Reuters news service wrote that “the Supreme Court said in 1821 that Congress has the `inherent authority’ to arrest and detain recalcitrant witnesses.”

In 1927, the Reuters report continued, “the high court said the Senate acted lawfully in sending its deputy sergeant-at-arms to Ohio to arrest and detain the brother of the then-attorney general, who had refused to testify about a bribery scheme known as the Teapot Dome scandal.”