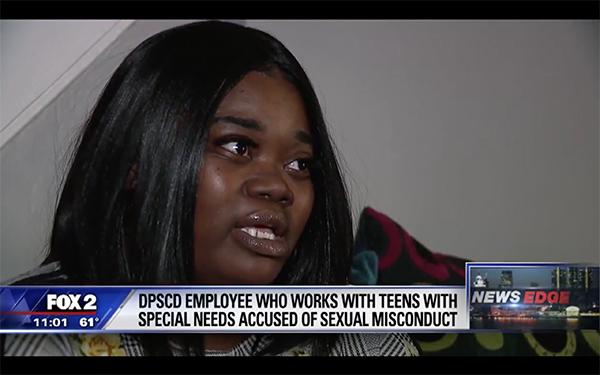 The mother says she reported him last year.

The mother of a 16-year-old student with disabilities says a Detroit Public Schools Community District employee sexually harassed her daughter last year, and the administration has been slow to act.

Last year, her daughter complained about a paraprofessional, who said "different things about her breasts," Hardwick told Fox 2.

"He said 'Hey I wish you were older.' Things of that nature," she said. "And it just made her feel very uncomfortable to where she was uncomfortable going to school."

Hardwick told Fox 2 she reported the employee to the administration last year. But recently, her daughter saw him at school again.

"I thought he was removed already until she told me she had seen him again and he began to say things to her again," Hardwick said. "And she was like 'Ma, he's not gone.' I'm like who? She was like, he's still here."

The school has not released the employee's identity, since he hasn't been charged with a crime. The administration released the following statement Tuesday:

The district is asking that if any student had an inappropriate interaction or relationship with any district/school employee, to call or email them (dpscd.compliance@detroitk12.org, 313-873-7341).