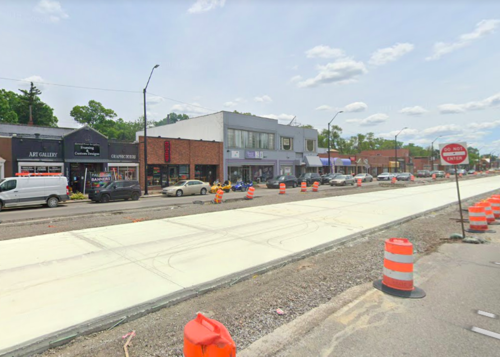 Construction crushes business. It's fact. It happened along Woodward when the QLine's tracks were being laid, and it's happening now on Livernois near 7 Mile, where a city project to promote walkability by removing a median and widening sidewalks is underway.

So why, residents ask in a new Bridge Magazine article, wasn't more done to help businesses brace for the blow?

There are 150 businesses along the so-called "Avenue of Fashion" — most of them black-owned. Business is down significantly at some, and at least one — Kuzzo's Chicken and Waffles — has temporarily closed. Another 18 businesses that were supposed to open never did, according to the report.

... many along the Avenue of Fashion say city officials sought little input before moving ahead with the 1.2-mile project.

"It was one or two meetings to get feedback ...(But) it was not consistent and regular outreach,” said Dalton Roberson, who lives ... about two blocks from the project.

.... Many merchants and residents said the work disproportionately harms black-owned businesses for a streetscape project that will mostly benefit newer residents.

“In terms of walkable [areas] and the bike lanes, it's like they're forcing gentrification in a neighborhood that didn't ask for it. Those decisions are made in a bubble,” said Wayne Phillips, who lives in the Boston-Edison neighborhood and frequently shops on Livernois.

The construction, initially slated to wrap up in November, is now to last until spring.

It took several months for the city to step in to ease the burden on businesses. It has now been promoting the area and offering financial assistance to affected business in the form of a loan they won't have to begin paying back for two years. After two years of on-time payments, recipients are eligible to have 60 percent of the loan forgiven. Six businesses have been approved, Bridge reports.

The hope is that the businesses will survive the temporary crunch and reap greater benefits down the line, when more people, in theory, visit the area.

Livernois is one of seven commercial corridor upgrade projects designed to encourage "20-minute neighborhoods," where residents can have their needs met within a short walk. Former planning director Maurice Cox came up with the idea.

But Bridge reports things aren't going much better at another one of the sites.

In the Grandmont-Rosedale neighborhood, Max Hardy unexpectedly announced the closure of his River Bistro restaurant Sept. 27. [Hardy] was featured in The New York Times as a leading black chef changing the food industry in America.

Asia Hamilton, owner of Norwest Gallery of Art along Grand River on the far west side, said ... it's difficult to find parking and it's an unpleasant place to walk around with a lot of dirt and debris outside.