Last week, eggs and biscuits were on the menu at Detroit city hall.

Duggan administration officials provided the meal to residents in the mayor's cabinet room as part of an invitation-only meeting on his $250-million blight bond proposal. The goal, officials said, was to educate residents about the plan, which involves the demolition of an estimated 19,000 abandoned homes that remain in the city.

Media was not permitted to attend, but officials assured us the meeting would merely involve a presentation and question-and-answer session. City resources would not be used for political advocacy, they said. The meal was paid for by a nonprofit with ties to the mayor.

But when Deadline Detroit crashed the event, we found a Duggan official in the midst of a hard sell: Residents were being asked to convince City Council to approve the bond resolution so it could advance to the March ballot.

“We all know that we need these bonds, we need these homes to go down,” Gail Fulton, Duggan’s liaison to council, told the several dozen people in attendance. “It’s important we get the message across clearly. We need you all to be compelling ... and today is the day in which we may be able to get a response from the council.

“We need you to let your hearts pour out.” 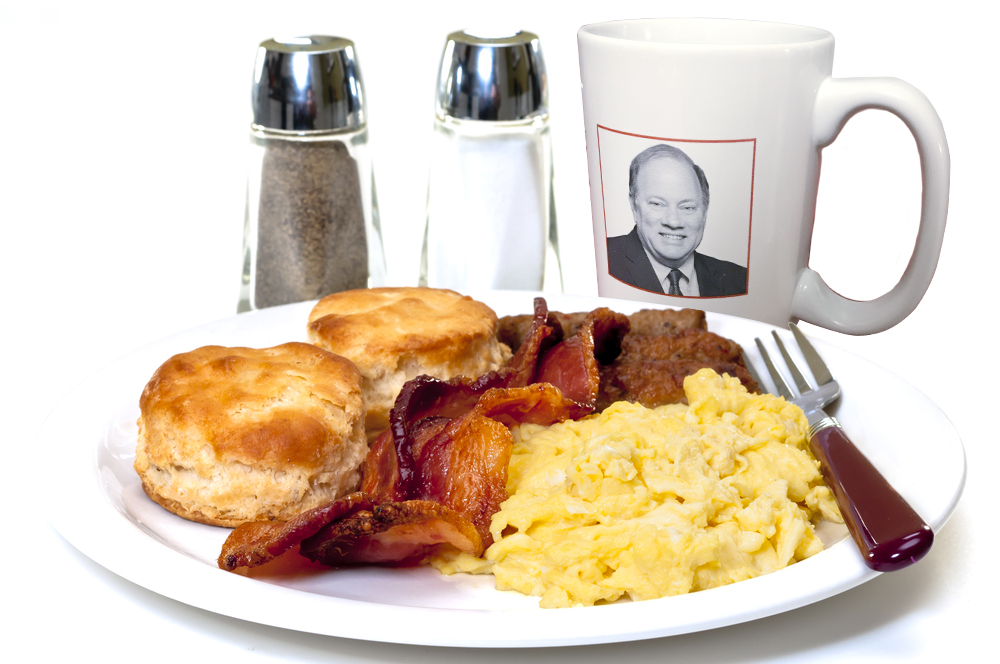 Chief of Services and Infrastructure Arthur Jemison, who helped lead the meeting, later added: “If you don’t feel like you want to make a comment … you don’t have to.”

Duggan officials then helped residents fill out comment cards and escorted them to council chambers to deliver their pitch.

The move drew swift condemnation, with councilmembers calling it “despicable” and “disrespectful” — an example of the administration “playing politics with people.” Council President Brenda Jones refused to accept the stack of cards.

Part of council's concern was that the administration presented only one side of the debate in issuing its call to action.

While it’s agreed that blight remains a problem in Detroit, there are questions as to whether the $250 million initiative is the best way to address it. Opponents have argued against pumping more money into a program that’s been plagued by abuse, mismanagement, and public health problems since its inception six years ago. There are also questions as to whether the city should tap into its limited bonding capacity for demolition, when much of its vulnerable population could benefit from more funding for things like home improvement, tax-debt relief and job training.

“There was a tone of trying to pit community against council as if we're holding up things,” Councilmember Mary Sheffield said of the meeting. “This really shouldn’t be happening. We are here to do our due diligence and I will not be pressured and I will not be rushed.”

She and other councilmembers view themselves as the lone obstacle to the initiative's passage, as they anticipate Duggan's allies to mount a well-funded campaign that drives enough supporters to the polls in March.

Though Duggan is seen by critics as a shrewd politician willing to push ethical boundaries to advance his agenda, at least one Detroit political observer says the meeting marked a new low.

“When you buy people stuff — that’s when you cross the line,” said political consultant Steve Hood. “When [residents are] given something of value like a breakfast, walked in, marshalled, told what to say — that crosses the line.” 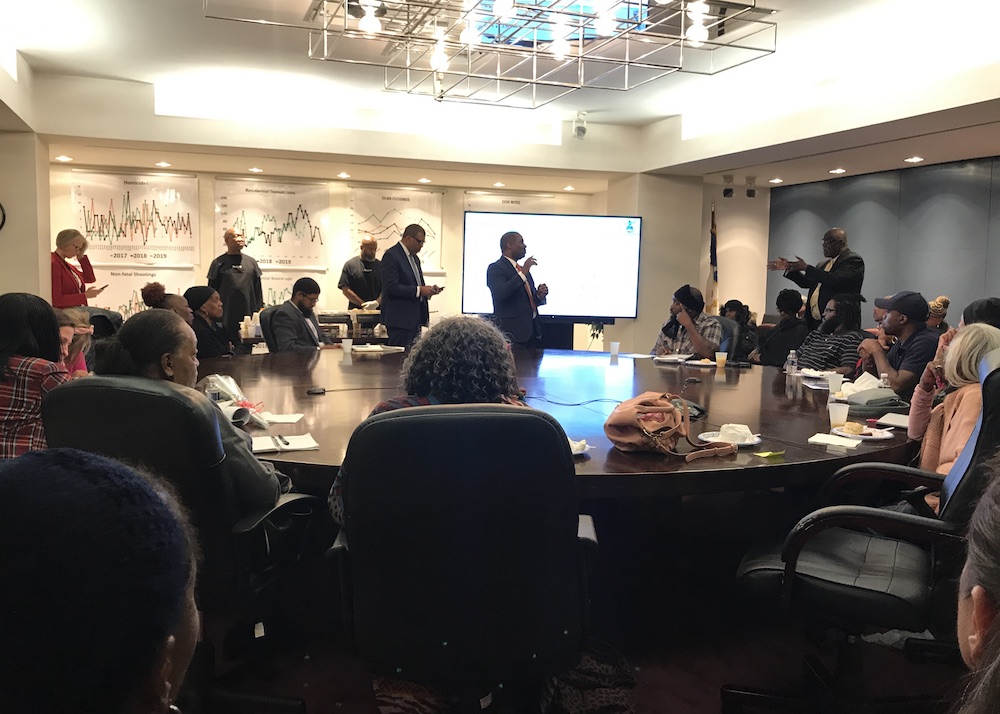 The meeting was organized by Duggan's district managers, who’ve been key promoters of his various initiatives. The mayor created the appointed positions in 2014 to provide constituent services that mirror those of City Council.

But the managers are able to leverage their connections with residents to push controversial proposals the mayor supports. In March, district managers advocated for an expansion of the city’s surveillance program, asking community leaders to “gather signatures ... pledging support for the Neighborhood Real-Time Intelligence Program."

And a handful of the constituent servants have, with the mayor’s backing, gone on to run for state Legislature in areas overlapping their districts. Those who made it to Lansing earlier this year helped pass a Duggan-backed auto insurance reform bill that critics say is a boon for insurance companies.

“Using taxpayer or covert funds to promote propaganda thwarts democracy,” said Sherry Gay-Dagnogo, leader of the Detroit delegation in the Michigan House of Representatives, noting the dark money campaign that fueled some of the Duggan-backed candidates’ ascent. “It’s part of an ongoing strategy to wipe out anyone that does not agree with the mayor’s corporate agenda. And it’s very strategic on [his] part — he has continued the legacy of the McNamara regime.”

Duggan’s political activity, she said, also quashes dissent among elected leaders, who may be too scared to cross him knowing one of his allies is waiting in the wings, having built relationships with their constituents. When several members of the Detroit delegation in 2017 joined the majority of their Democratic colleagues in opposing an earlier version of the auto insurance bill, for example, Duggan threatened to “campaign against every one of them.”

But while such moves may appear questionable, none of them are necessarily illegal, Hood said. Former Mayor Coleman A. Young had a political machine even more formidable than Duggan’s, plus a network of Neighborhood City Halls that may have inspired the Department of Neighborhoods that houses the district managers. Using taxpayer resources to solicit support for controversial initiatives, he added, may “seem like a big deal, but has always been done.”

Though he says Duggan’s blight meeting raises concern as a potential quid pro quo, it does not amount to a violation of the Hatch Act regulating lobbying activity, because the bond resolution hasn’t yet been cleared for the March election.

The food was paid for by the Detroit Progress Fund, a nonprofit that assists the mayor’s office with “expenditures necessary to conduct the business for the city.” Demolition contractors have donated to the fund in the past.

The district managers, for their part, appear to have been briefed on what’s legally permissible.

Asked where he believes the line between educating constituents and political advocacy to be, Department of Neighborhoods head Ray Solomon responded, “The issue is not on the ballot.”

In interviews, he and Jemison seemed to misrepresent the meeting's tenor to a degree. 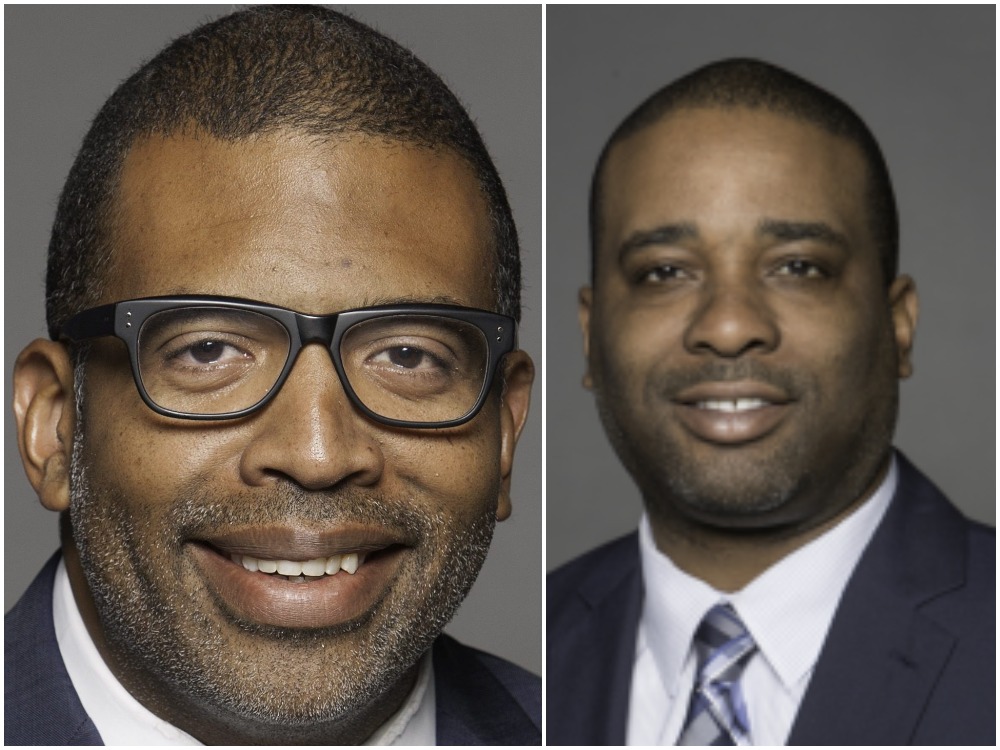 There were two such events, on Oct. 16 and Oct. 22, both immediately before council sessions in which the blight bond was debated. The guest list consisted of community leaders and residents who district managers believed could be receptive to the initiative.

After the first meeting, Jemison told Deadline Detroit “we only went through the presentation we give before council” and that he was “treating it a lot more like a focus group.”

“I’m a little concerned about where you’re getting your information,” he said when we told him residents reported having been told to advocate on behalf of the bond. “It’s a way of getting information about how people are responding and what their concerns are and encouraging them to share their opinions with their colleagues, good or bad.”

Jemison said Friday that, prior to our arrival at the Oct. 22 meeting, he told residents they "should feel comfortable sharing their support or opposition of the proposal or remaining silent."

But two residents in attendance said they felt they were being sold something.

“Any time there’s food being served it’s a way to get your attention,” said Barbara Collins, a block club president on the east side. “They tried to pacify us. They kept saying, 'take this to City Council, this is not a priority for City Council.'”

Edythe Ford, an organizer with the Mack Avenue community development corporation, was more blunt in her assessment.

“This is a snow job. They’re trying to win us over,” she said when we saw her in the cabinet room. “When was the last time the city invited us to a meeting and had chefs standing there and served breakfast with eggs, biscuits, and sausage and bacon? Please. I was born last week, not yesterday.”

About 15 people spoke in favor of the bond before council last Tuesday. Only one or two who attended the meeting — including Collins — spoke against it.

Solomon told Deadline Detroit we could not sit in because it was an “internal meeting” with “exactly 40 to 50 seats” and “we filled the seats up.”

We made it in to find multiple seats open, but were quickly asked to leave when a city staffer saw us interviewing a resident.

“Are you part of the press? You can’t be here,” said the woman. She then asked that the resident we were talking to not give us his name.