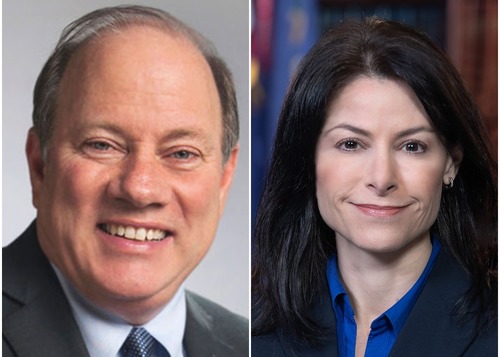 The Michigan Attorney General's office sought the emails of Detroit Mayor Mike Duggan and top officials involved in fundraising for a program run by a woman with whom he's been linked when it executed a search warrant on the city last week.

That's according to the Free Press, which obtained the search warrant from an activist who filed a Freedom of Information Act request for it.

The search warrant sought the following records from the city's Innovation and Technology Department:

"Any and all records, electronic records, electronic mail (email), physical items, documents, with electronic document attachments including photographs or videotapes … for any and all City of Detroit email accounts belonging to Michael Duggan, Alexis Wiley, Ryan Friedrichs, Sirene Abou-Chakra, Monique Phillips and Claire Huttenlocher, between the dates of 1/01/2014 and 11/7/2019."

The Attorney General's Office's search also included backup files, archived files and any related files from past emails services the city used, according to the search warrant.

Chief of Staff Wiley and Office of Grants and Development Diretor Friedrichs and his deputy Abou-Chakra ordered Phillips and Huttenlocher to delete hundreds of emails pertaining to the program, Make Your Date, according to a report by Detroit's Office of the Inspector General. Attorney General Dana Nessel's office is now looking into the deleted emails as part of a criminal probe.

The emails, ordered destroyed after media began looking into the program, conveyed the full scope of fundraising for the program run by Wayne State University's Dr. Sonia Hassan. The OIG's office determined that the mayor gave the program preferential treatment.

Duggan has refused to reprimand the three officials, as the OIG recommended, saying he believes they ordered the emails deleted in order to protect junior staffers from a "media circus."