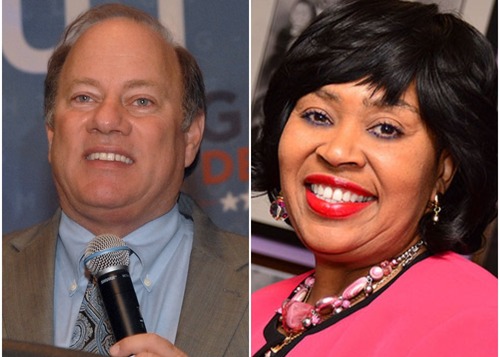 The Duggan administration is again being accused of resorting to questionable tactics to garner support for its proposed $250-million demolition bond as Detroit City Council weighs whether to advance the plan to the March ballot.

The administration is believed to be behind a Monday citywide call campaign aimed at lobbying councilmembers critical of the proposal.

Council President Brenda Jones blasted the lobbying effort at a packed Monday night special session on the bond, saying her staff spent “eight hours today answering calls from a telemarketer” and “could get nothing done.”

“I think that was the most ridiculous poli-trick I’ve ever seen,” she said. “Intimidation gets no place with this council president.”

A spokesman for the mayor did not respond when asked whether Duggan was involved.

Councilmember Mary Sheffield, who was also targeted, said the callers reached out to city residents, provided limited information on the demolition bond, then patched those in favor of the proposal through to their respective representative.

The administration came under fire for similar maneuvering last month, when it invited community leaders to a private breakfast at city hall then escorted them to a council hearing where they were encouraged to advocate for the bond proposal. The breakfast was paid for by a nonprofit linked to the mayor.

Councilmember Roy McCalister said he too was inundated with calls to vote yes. He, Sheffield, and Jones are among five representatives who’ve questioned the proposal at recent public hearings.

But one member — Janeé Ayers, who’s been mostly quiet on the bond issue — attested to having received separate phone bank-style calls urging her to vote no. She said her staff could hear multiple voices reading from the same script in the background of the calls. Councilmember James Tate said he received calls seeking both a yes and no vote. 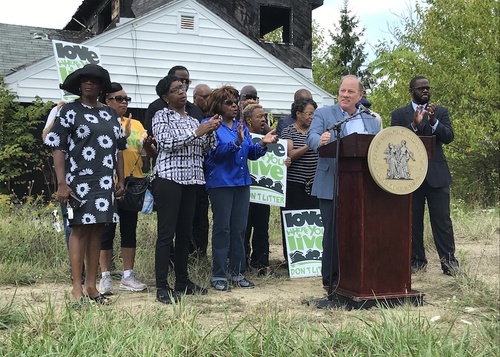 The calls came on what was believed to be the eve of a long-awaited and highly contested council vote on the proposal the administration says will “wipe out blight in the city once and for all” by 2025.

The bond would help tear down 19,000 additional houses as federal funding for the six-year-old demolition program dries up. Nearly 20,000 residential structures have been removed with $340 million in federal and city funds since the program began.

An additional up to 1,000 Land Bank-owned houses would be rehabbed for purchase under the proposal.

Officials argue continued demolitions are needed to help improve more Detroit neighborhoods by spurring investment. Thus far, blight remediation has primarily been concentrated in areas of high occupancy due to stipulations on the federal dollars fueling much of the program.

But the $250-million proposal has faced fierce opposition in council, with critics concerned about abuse, mismanagement and environmental risks associated with the program to date. They’ve also questioned whether demolition is the best use of the city’s limited bonding capacity when things like home repair grants and foreclosure assistance are needed to stave off new blight.

Approximately 200 residents showed up to speak at Monday's special council session on the issue, with the majority opposed.

“Duggan has tested the waters and knows a lot of people are against it and is abusing his power like he always does,” Charter Commissioner Nicole Small, who spoke against the bond, said of the mayor's purported lobbying effort.

Council President Jones also on Monday accused the administration of resorting to "intimidation tactics" in sending a letter to contractors last week warning that demolitions could not proceed as planned without approval of the $250-million plan. The administration said the warning was necessary.

Though Jones did not call out Duggan directly for the phone campaign, she refused to discuss a potential compromise on the bond with his chief financial officer, Dave Massaron, saying she had “no trust” in anyone who would solicit help from a “telemarketing company” to lobby her to vote yes. Jones previously suggested a $50-million pilot through which the administration could work to improve its track record.

A representative with Sheffield’s office said they understood the calls to be from a political consulting firm working “under the auspices of the mayor’s office.”

“In almost every instance the resident [on the phone] didn’t know who they were being transferred to and, when presented with alternative information, they almost all changed their mind and supported Sheffield’s decision to vote no,” said her chief of staff Brian White.

Residents opposed to the plan on Monday expressed a range of concerns, including a recent audit into the program that found it mismanaged and lacking proper oversight, as well as environmental concerns, like a recent string of asbestos violations by contractors. 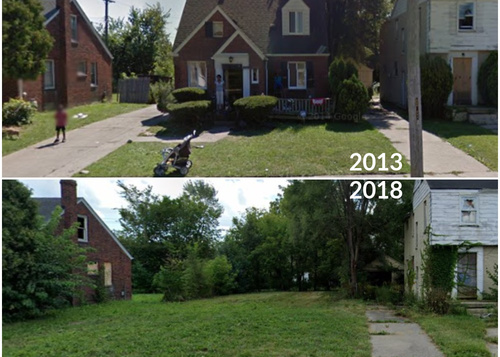 15444 Hazelridge St. was occupied within three years of its tax foreclosure and demolition. Less than $10,000 was owed on the property. It was demolished for $15,000. (Photo: Google Maps)

Others argued the money could be better spent elsewhere, citing the tax-foreclosure crisis that has driven tens of thousands of Detroiters from their homes since Duggan took office. A Deadline Detroit report last month found that at least $23 million has been spent demolishing homes that were occupied and tax foreclosed within the past five years. The demolitions on average cost twice as much as the delinquent tax bills over which the homes were foreclosed.

“It’s as if we are measuring progress in this city for some reason by how much of it we are tearing down instead of how many people we’re keeping in houses," said resident Joe Maurer. "I think we should ask a different question: How can we keep people here, how can we stop the foreclosures?

“It’s as if we have a whole bunch of sick people and instead of getting doctors and nurses and medicines, the administration wants to build funeral homes.”

'Let the citizens make a decision'

Those in favor of the plan argued that abandoned houses are magnets for crime and their removal is crucial to improving neighborhoods.

Rev. Larry L. Simmons, who works with kids in Brightmoor, says of the more than 100 he's encountered, "only one of them has said they want to live in Detroit and when I ask them why, they say 'it’s too ugly.'

“I get that there are problems, I get that you got issues with the administration … but I’m asking you to vote yes and put this on the ballot and let the citizens make a decision," he told the council. "We are to be trusted.”

Sheffield and others, however, have warned that, given the mayor’s political muscle, the proposal will likely be a shoo-in if it goes before voters.

Council has until Dec. 17 to approve the plan in order for it to appear on the March presidential primary ballot, but the body is scheduled for recess after Nov. 26.

If approved later, the proposal could go before voters in a higher-turnout election, like those in August and November.

Officials have said a delay could result in a higher interest rate for the bond.