Fifth-term Rep. Justin Amash, already in the news because of congressional attention described below, tweets Monday evening about his easy-call view impeaching the president:

Pres. Trump’s conduct—using the office of the presidency to seek the aid of a foreign power for personal and political gain—more precisely reflects the type of conduct the Framers of the Constitution sought to remedy through impeachment than that of any president impeached prior.

Some Democrats want to use Michigan Congressman Justin Amash to go after Trump. 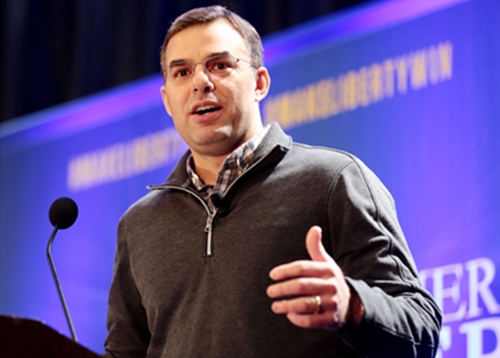 A private campaign is underway to draft Amash --  who left the Republican Party in the summer to become an Independent --  as an impeachment manager in the Senate trial of President Trump, The Washington Post reports. The Dems hope to diversify their side's case with a rare conservative voice.

A group of 30 freshman Democrats, led by Rep. Dean Phillips (D-Minn.), has asked House leaders to consider the move to add Amash, who considers himself a libertarian.

Amash, a fifth-term representative from West Mighigan, is regarded as one of the most conservative members of the House and big critic of Trump.

The full House is scheduled to vote on two articles of impeachment on Wednesday. If they pass, a trial in the Senate likely starts in January.