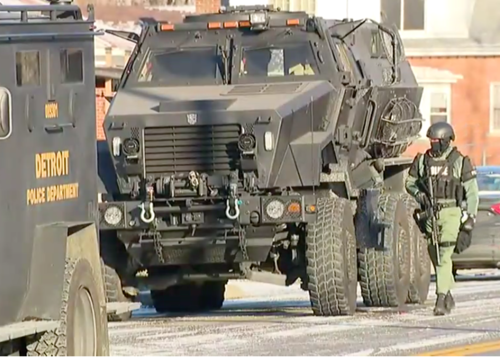 The scene Thursday morning at the 19000 block of Pekley. (Photo: Screengrab, Fox 2 video)

It's been a long stretch for Detroit police on Pekley Street, near Seven Mile and Shoenherr.

That's where they say a gunman who shot into his neighbor's house twice early this week has barricaded himself in his home.

The man, a 45-year-old bounty hunter, has a history of mental illness, police say.

"His life has just kind of spiraled down, and we don't want to add to that, we just want to get him some help," commander Darin Szilagy tels Fox 2.

No one has been hurt.

Police say they've had "intermittent communication" with the man and will continue to give him opportunities to surrender. Michigan State Police and Dearborn police are also on scene.