Police say their days-long standoff with a gunman on Detroit's east side has ended "peacefully," following a painstaking effort to get him to surrender.

The three-day effort near 7 Mile and Schoenherr involved numerous chemical deployments, drones, robots, and left the gunman's house looking like this: 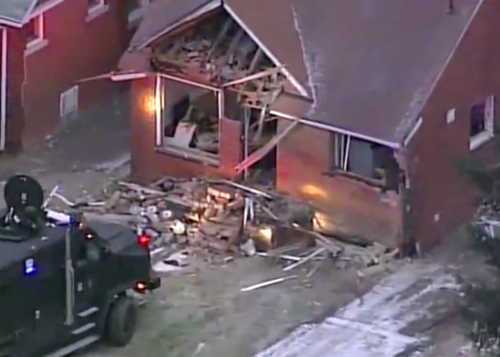 The man, who police say is mentally ill and also a bounty hunter, barricaded himself in his home early Tuesday after shooting into the homes of his neighbors (an ongoing problem that received little police attention, according to this WXYZ sidebar). Police entered the home and retrieved him Thursday, after a 12-hour stretch in which they hadn't heard from him.

They found him hypothermic. He was taken to a hospital.

Police Chief James Craig said it was the longest standoff he's seen in his career.

"This man is definitely a survivalist" he said.

Craig and media outlets reported police used a number of unsuccessful methods to drive out the man, cutting off gas and water to his home, and deploying chemicals and "distraction devices."

According to the Free Press:

They also deployed several robots, but would come back disabled. A drone that flew over the gunman's house was knocked down.

Before police went in, the Freep reports police "punched" a hole into the house to fly a drone inside.

From the device's heat signal, officers can determine whether there is any movement.